This Lady Had Personality! 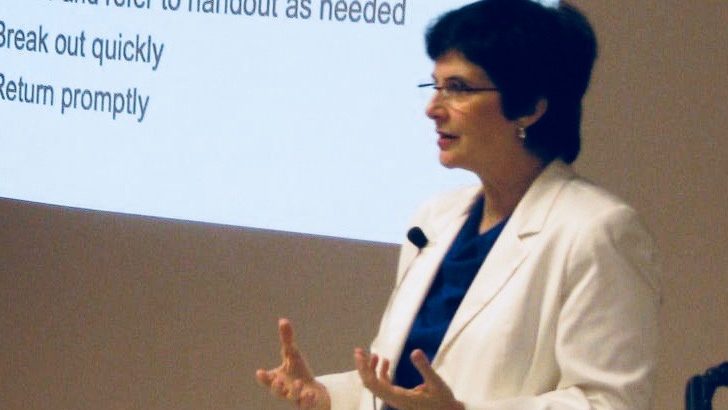 Understanding personality, or temperament, plays a significant role in the skills I teach. Some people now prefer the Big Five system of temperament typing, but for communication skills purposes, I still like the Meyers-Briggs system, particularly as explained by David Kiersey. Although scholars have recognized different human temperament types as far back as ancient Greece, it was Isobel Briggs Meyers, with the help of her mother and spouse, who fully fleshed out the concept.

The Most Important Temperament Trait

Many people hear the name “Myers-Briggs” and say, “Oh yeah, introvert or extrovert.” However, introversion vs extroversion is the least important factor in understanding how different peoples’ minds work and tailoring our communication accordingly.

In the Meyers-Briggs system, the most important factor is whether a person tends to think in abstract terms or concrete terms. Abstract thinkers notice the big picture and project into the future. Some do this by logical reasoning, If I do X now, Y will happen later. They excel in things like strategic planning, high-level executive positions, and science.

Other abstract thinkers use an empirical process, noticing patterns in a number of experiences so they can better interpret similar things later. They’re empathetic because they accurately read subtle facial expressions and vibes.

This doesn’t mean that abstract thinkers are oblivious to what’s going on around them, nor that concrete thinkers are incapable of logical or empirical thinking. However, each has to work a little harder at their non-dominant thinking style. An abstract concept must be especially impressive to grab them.

These different types of thinkers are not evenly distributed in the human species. The Myers Briggs people put abstract thinking at about 25% of the population, while Dr. Kiersey puts it at about 16%. Either way you slice it, abstract thinkers represent a minority of us. This distribution helped humans survive when they faced predatory animals and other life-threatening conditions. A group functioned best with a few forward thinking leaders and lots of people who would readily follow when danger arouse.

Our social evolution has outstripped our biological evolution. Life is more complex now. Communications reach billions, not just a clan or tribe. Fight-or-flee situations are less frequent. Yet those who tune out logical or empirical concepts now put themselves, and others, in different kinds of dangers.

The images of New Orleans during and after Hurricane Katrina were upsetting to everyone, but especially concrete thinkers. The next time a hurricane was possibly headed for the Galveston-Houston area, officials pleaded with people to heed the mnemonic device, “Run from the water, hide from the wind.” People who lived far enough inland that the storm surge could possibly reach them (as clearly shown on broadcast maps) should shelter in place to keep evacuation routes open for those closer to the coast.

That hurricane weakened and swerved away from our area. Yet, remembering Katrina, so many people fled in panic that the highways came to a total standstill for hours and hours on end. Cars ran out of gas sitting at an idle, further obstructing traffic. Tow trucks and fuel trucks couldn’t reach them. Elderly people on a bus evacuating a nursing home died. A woman I know, an intelligent, well educated, professional woman, said, “I have a daughter. I can’t take any chances with her,” and they took to the road, putting the little girl at even greater risk.

Concrete thinkers are also more susceptible to tricky sales techniques—whether the predator is selling goods, services, or ideologies. If people make decisions, such as how to deal with debt or how to vote, based on TV ads featuring a few sound bites along with emotion evoking images, they put themselves and others at risk.

We can, however, can craft impactful messages, messages that include elements for each of the thinking styles, with relatively few words or images. We can do a lot of good once we understand how different people think. It takes a bit of education, time and effort to compose such messages, but we can do that when a lot’s at stake. Abstract thinkers, though few in numbers, might be more willing to make the effort, but those few can do a whole lot of good.

Say I were creating a TV ad for protecting rainforests. I’d first grab the attention of the concrete thinkers before they change the channel. An image of an adorable, threatened rainforest animal species [For the concrete sensory type]. Audio, “10,476 square kilometers of Amazon rainforest were destroyed last year. This teacup monkey could be extinct next year,” [For the concrete facts-and-figures type].

Then, I’d include a little something for the abstract thinkers. An animated map showing the amount of rain forest shrinking over the last 8 years [For the pattern seekers]. Audio, “The last 8 years are the warmest since since modern record keeping began. Restore rain forests to reverse climate change,” [For the logical ones].

I owe the fact that I can do this all to Isobel Briggs Meyers, a lady with personality!

Do you have a message you would like to deliver more effectively? You might be surprised at how efficient a bit of consultation can be. Please contact me here for more information.

Margaret Anderson’s presentation takes the wisdom of Ben Franklin’s stated virtue: “Speak not but what may benefit others or yourself” into the realm … END_OF_DOCUMENT_TOKEN_TO_BE_REPLACED

While reading “Bridges to Consensus”, I volunteered to organize a project with my quilt bee, 15 professional, talented, and strongly-opinionated w… END_OF_DOCUMENT_TOKEN_TO_BE_REPLACED

Thank you. It was a pleasure attending your class. It taught me to ask “Why?” when I am trying to resolve an issue. I learned a lot and am happy I had… END_OF_DOCUMENT_TOKEN_TO_BE_REPLACED

Although the book [Bridges to Consensus] is written with clergy in mind, I was instantly engrossed in the material and could see my way to using her s… END_OF_DOCUMENT_TOKEN_TO_BE_REPLACED

So much of our daily communication consists of argument, I’m delighted to learn new methods that remove the argument and place both parties on the roa… END_OF_DOCUMENT_TOKEN_TO_BE_REPLACED

My life has gone much more smoothly since taking your class.  Be it a discussion with…or a coworker, there is less stress and more preferable resul… END_OF_DOCUMENT_TOKEN_TO_BE_REPLACED

I believe Bridges to Consensus applies to every facet of our lives… It doesn’t knock you over like a fire hose. It enters your spirit quietly and ge… END_OF_DOCUMENT_TOKEN_TO_BE_REPLACED

It Strikes a Chord: I’ve spent a lifetime reading stories, and I’m not easy to please. This little pocketful kept me pleasurably engaged all the way t… END_OF_DOCUMENT_TOKEN_TO_BE_REPLACED

The course was very interesting and learning the skill set in the classroom to apply in real life situations is invaluable.  It’s definitely about … END_OF_DOCUMENT_TOKEN_TO_BE_REPLACED

As a ghostwriter, I negotiate contracts often, and for “invisible” goods. …Margaret has taught me how to appeal to a prospect’s often hidden needs a… END_OF_DOCUMENT_TOKEN_TO_BE_REPLACED

It [Bridges to Consensus] lends itself specifically to church issues, while making itself significantly useful for understanding communications in any… END_OF_DOCUMENT_TOKEN_TO_BE_REPLACED

Working with Margaret helped me understand that conflict does not automatically have to mean confrontation. Now I know how to seek solutions that bene… END_OF_DOCUMENT_TOKEN_TO_BE_REPLACED

Margaret Anderson was instrumental in helping me hone my skills so that I could sort out, get clear, select, and land a “practically perfect” new busi… END_OF_DOCUMENT_TOKEN_TO_BE_REPLACED

It has been said that one of the best ways to teach is through story. In Love on the Rocks with a Twist, Margaret Anderson teaches the fine art of con… END_OF_DOCUMENT_TOKEN_TO_BE_REPLACED

As a ghostwriter, I negotiate contracts often, and for “invisible” goods. …Margaret has taught me how to appeal to a prospect’s often hidden needs a… END_OF_DOCUMENT_TOKEN_TO_BE_REPLACED

A Go-To Reference & Entertaining Read in One Book: Delightful fiction, indeed! Each of the stories is a standalone pleasure. I especially enjoyed the … END_OF_DOCUMENT_TOKEN_TO_BE_REPLACED