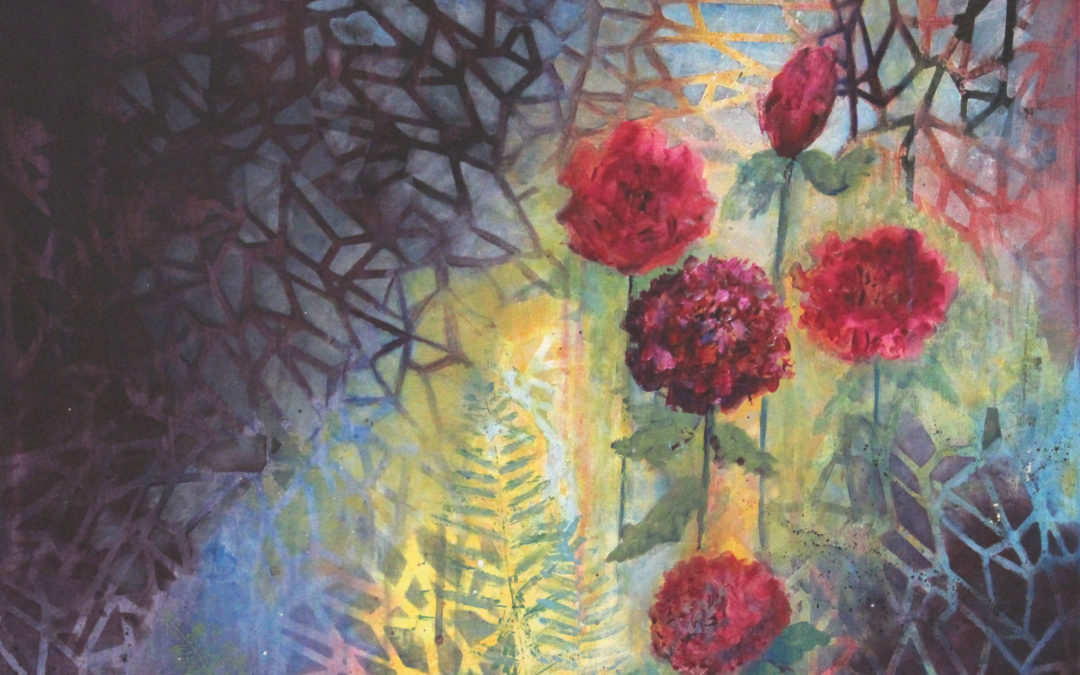 A New Painting Inspired Me

In planning a furniture rearrangement, I opened up space for a new painting. I bought Chris Rogers‘ piece, Through a Broken Fence, the featured image for this post. Chris is an amazingly creative woman. First, a graphic designer, then a successful novelist and writing instructor, she later added painting to her repertoire.

To me, the beautifully evocative work I bought suggests that the fence may be broken, the garden may have been neglected, wild plants may have volunteered themselves among the domestic flowers. One might view these conditions as unfortunate. I saw the broken fence and the volunteers combining with the original manicured garden to create a unique and enchanting combination with a beauty all its own.

Looking past defects to find good things to develop became part of my thinking through years of using the skills I teach. I advise trainees and clients, when brainstorming for ways to satisfy their interests and/or those of another person, to make note of every idea that flits through their minds. We tend to censor ourselves. A thought occurs, and before you can fully grasp it. You find something wrong with it. Then you dismiss the thought without consideration.

Don’t censor the bad ideas. They can inspire good ones. If we temporarily ignore the problems with a bad idea and look for what’s good about it, we can often modify the idea so it retains the good part without the problem–like fairytale Rapunzel spinning straw into gold. But if you leave it out of your notes, you might lose sight of it forever.

As I wrote in Bridges to consensus:

[Idea] modification is like altering a food preparation method to improve an unpalatable buffet item, say peeled raw cloves of garlic. They’re healthy (the kernel of goodness), but too sharp. We can retain garlic’s health benefits and turn it into a tasty treat by slow roasting it in terra cotta and serving it with French bread to spread it on.

In my very first training course I taught a group of intellectual property attorneys. We were working on a hypothetical problem involving a dispute between two ski shop owners with similar business names. I asked the trainees to think of some nutty ideas, unworkable ideas, for resolving their differences. One trainee said, “Let the two business owners fight a duel.”

I told her, “That’s a great example–not merely unworkable, but illegal. But there’s also something good about that idea. Can you take the kernel of goodness and insert it into a more workable context?”

She replied, “How about a ski-off contest?”

My group then worked together to develop that idea: Publicize the event. Include food and door prizes. Use it as an opportunity to not only award the desired business name to the winning skier, but also to announce a new name for the other.

One might say this is still unworkable, that the two business owners would never agree to it. But it’s much better than the original idea of a duel. It could be further improved, again by temporarily ignoring the possible flaw in the plan–that one or both parties might refuse to participate in a ski contest–and ask, “Where is the kernel of goodness in this idea? How can we retain the kernel of goodness even if one or both parties refuse to ski?”

Perhaps they will see the goodness in the element of good-natured competition, with opportunities for both ski shops to display their wares and speak to customers.

But what if one party doesn’t like the idea of one-on-one competition? There is still a kernel of goodness in creating an event in which both could participate and show their wares. They could organize a small trade fair and invite other sporting goods vendors. Beforehand, the two ski shop owners would agree which one will get to keep the current name and how much, if any, that party will pay to the one who agrees to change their name. The one who agrees to change can use the trade fair to hype the new name, present the change as a positive step, perhaps include a new color scheme for their shop, a “new look” sale.

You will think to yourself, if I were one of those ski shop owners, I wouldn’t agree to anything of those plans. That’s fine, because the point is not what decision a ski shop owner should make. Rather, the the point is the process by which two people may come to an agreement by not dismissing unworkable ideas out of hand, and rather, looking for the kernels of goodness and developing from there. And if you were one of the shop owners, you could use that very process to come to a totally different agreement, one that is satisfactory to you. Remember, when brainstorming, fighting a duel would not be the only nutty idea on the list. You could work on all the nutty ideas and choose the most appealing to you that is also agreeable to the other person.

Try This for Yourself

You don’t have to wait for a disagreement to practice this process, in fact, you shouldn’t wait. Use it to make a good idea even better. Purchasing Chris Rogers’ Through a Broken Fence was a wonderful idea for me. But I improved it by looking beyond the obvious and using it as inspiration for this very blog post.

If you use this process to make a bad idea workable, or to make a good idea better, write it up and send it to me. I love real-life success stories.

Margaret Anderson’s presentation takes the wisdom of Ben Franklin’s stated virtue: “Speak not but what may benefit others or yourself” into the realm … END_OF_DOCUMENT_TOKEN_TO_BE_REPLACED

While reading “Bridges to Consensus”, I volunteered to organize a project with my quilt bee, 15 professional, talented, and strongly-opinionated w… END_OF_DOCUMENT_TOKEN_TO_BE_REPLACED

Thank you. It was a pleasure attending your class. It taught me to ask “Why?” when I am trying to resolve an issue. I learned a lot and am happy I had… END_OF_DOCUMENT_TOKEN_TO_BE_REPLACED

Although the book [Bridges to Consensus] is written with clergy in mind, I was instantly engrossed in the material and could see my way to using her s… END_OF_DOCUMENT_TOKEN_TO_BE_REPLACED

So much of our daily communication consists of argument, I’m delighted to learn new methods that remove the argument and place both parties on the roa… END_OF_DOCUMENT_TOKEN_TO_BE_REPLACED

My life has gone much more smoothly since taking your class.  Be it a discussion with…or a coworker, there is less stress and more preferable resul… END_OF_DOCUMENT_TOKEN_TO_BE_REPLACED

I believe Bridges to Consensus applies to every facet of our lives… It doesn’t knock you over like a fire hose. It enters your spirit quietly and ge… END_OF_DOCUMENT_TOKEN_TO_BE_REPLACED

It Strikes a Chord: I’ve spent a lifetime reading stories, and I’m not easy to please. This little pocketful kept me pleasurably engaged all the way t… END_OF_DOCUMENT_TOKEN_TO_BE_REPLACED

The course was very interesting and learning the skill set in the classroom to apply in real life situations is invaluable.  It’s definitely about … END_OF_DOCUMENT_TOKEN_TO_BE_REPLACED

As a ghostwriter, I negotiate contracts often, and for “invisible” goods. …Margaret has taught me how to appeal to a prospect’s often hidden needs a… END_OF_DOCUMENT_TOKEN_TO_BE_REPLACED

It [Bridges to Consensus] lends itself specifically to church issues, while making itself significantly useful for understanding communications in any… END_OF_DOCUMENT_TOKEN_TO_BE_REPLACED

Working with Margaret helped me understand that conflict does not automatically have to mean confrontation. Now I know how to seek solutions that bene… END_OF_DOCUMENT_TOKEN_TO_BE_REPLACED

Margaret Anderson was instrumental in helping me hone my skills so that I could sort out, get clear, select, and land a “practically perfect” new busi… END_OF_DOCUMENT_TOKEN_TO_BE_REPLACED

It has been said that one of the best ways to teach is through story. In Love on the Rocks with a Twist, Margaret Anderson teaches the fine art of con… END_OF_DOCUMENT_TOKEN_TO_BE_REPLACED

As a ghostwriter, I negotiate contracts often, and for “invisible” goods. …Margaret has taught me how to appeal to a prospect’s often hidden needs a… END_OF_DOCUMENT_TOKEN_TO_BE_REPLACED

A Go-To Reference & Entertaining Read in One Book: Delightful fiction, indeed! Each of the stories is a standalone pleasure. I especially enjoyed the … END_OF_DOCUMENT_TOKEN_TO_BE_REPLACED