Broken Pipes and People Skills 2: Resistance to Being Wrong 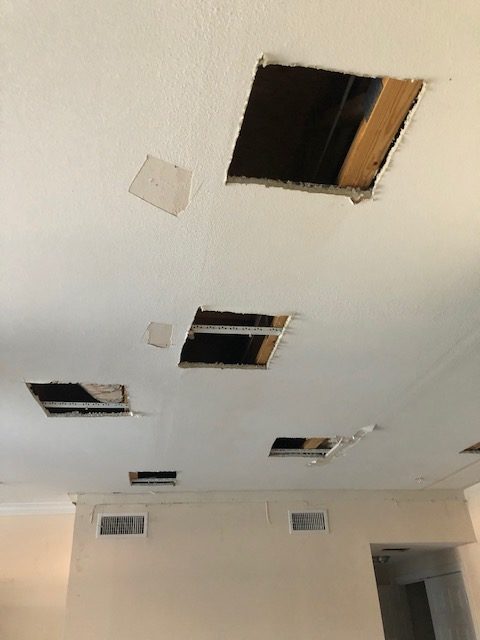 As some of you know, I coined what I call the “Silver Rule” because people naturally resist being criticized, accused, argued with–as Dr. Gregory Lester terms it, “being made wrong” [Power with People]. You can read more about how to use the Silver Rule in Bridges to Consensus, pp. 35 et seq. and in Love on the Rocks with a Twist, pp. 140 et seq.

During my “broken pipe event,” I both witnessed and experienced a dramatic two-part demonstration of how making someone wrong can work against you.

I often visited a buffet eatery while my apartment was being dried out and repaired. One day at breakfast, I sat facing the buffet line when a woman in line turned, looking past me, and began shouting, loud enough for everyone to hear, “Oh my God! Oh my God! Are you OK? Oh my God! Are you OK?” She rushed past me.

Of course, I turned around to see what in the world was going on. A boy of about 8 years lay on the floor between a table and an industrial type bucket and mop on wheels. The child didn’t cry or show any other indication of significant pain that I could detect. He was able to stand up, walk, and eventually, sit down and eat.

An attendant restocks the buffet, tidies up, and later, mops the floor. Sometimes, I was the last one in the seating area when the buffet closed until lunch. If she had mopped in front of the trash drop, she would say, “Ms. Anderson, be very careful if you come over here. It’s wet and slippery.”

When the mother began shouting about her son, the buffet attendant went straight to them. In the absence of any outcry from her son, the mother then laid into the attendant, again shouting loud enough for everyone to hear. The attendant said she left the bucket near the wet area to show people that the area was wet. The mother shouted, “You shouldn’t be mopping at all while people are still eating. Where is the sign? Where is the manager?” and on and on.

The manager heard and came in. She tried to calm the mother, saying, “Ma’am, is your son OK?” and “Ma’am, let’s first make sure your son is OK. Then, everything else can follow.” The mother never responded to the manager’s enquiries. Instead, every time the manager suggested that they first check that the boy was OK, the mother would change the subject, getting louder each time. If she had been yelling about it being the wrong time to mop, and the manager said, Let’s see if your son is OK,” she would switch to yelling about the caution sign or “I want to hear you say you’re sorry.” It was wrong-making on steroids. Plus, the woman seemed oblivious to how she was ruining everyone else’s breakfast.

Eventually, the manager gave up and said, “There’s nothing left to do except call the police.” At that point, the mother moved to the table right beside mine where the father and sister were sitting.

In fact, many of the mother’s points were valid. The attendant had better postpone mopping at least until breakfast service was over, and/or mopped only in a blocked off area free of customers. She should have placed caution signs. Yet, I felt so vicariously offended by the mother’s extreme wrong-making, that I moved to a different table.

Despite hearing all that commotion, including the idea that the bucket and mop should show people the floor was wet, I slipped on my way to the other table, though I didn’t fall. I had seen the boy on the floor between the bucket and the closest table to the left. So in moving, I gave that bucket a wide berth way around it to the right. The bucket didn’t tell me the floor was wet over there, and I’m not eight years old.

Even after slipping, I was still so aggravated by the mother’s behavior that, after things calmed down, I asked for a quiet word with the manager. I gave him my contact information in case they wanted testimony that I did not hear the child cry, but I did see him walk, sit and eat. Then, I quietly told the manager that I, too, had slipped, that I didn’t want to get anyone in trouble, but suggested that they change the attendant’s practices.

I am fully aware of the strong instinct for mothers of many species to fiercely defend their young. No doubt it’s irresistible in some cases. In this mother’s place, I might have been just as wrong-making (although I hope I would at least do it at a lower volume). But irresistible instinct or not, wrong-making on steroids lost this woman pretty much any empathy the restaurant staff or the other diners might have had for her. For me, it was a lesson in how much good will and support one can destroy by wrong-making, even when one is, in fact, right about the actual issues.

Fortunately, many situations that tempt us to criticize, accuse, scold, etc. are neither urgent nor critical to life or limb. We can learn to resist the knee jerk urge to make someone wrong, giving ourselves a much better chance of bringing the person to agreement. I invite you to read more about the Silver Rule, and start practicing it today.

As a ghostwriter, I negotiate contracts often, and for “invisible” goods. …Margaret has taught me how to appeal to a prospect’s often hidden needs a… END_OF_DOCUMENT_TOKEN_TO_BE_REPLACED

Working with Margaret helped me understand that conflict does not automatically have to mean confrontation. Now I know how to seek solutions that bene… END_OF_DOCUMENT_TOKEN_TO_BE_REPLACED

My life has gone much more smoothly since taking your class.  Be it a discussion with…or a coworker, there is less stress and more preferable resul… END_OF_DOCUMENT_TOKEN_TO_BE_REPLACED

So much of our daily communication consists of argument, I’m delighted to learn new methods that remove the argument and place both parties on the roa… END_OF_DOCUMENT_TOKEN_TO_BE_REPLACED

It Strikes a Chord: I’ve spent a lifetime reading stories, and I’m not easy to please. This little pocketful kept me pleasurably engaged all the way t… END_OF_DOCUMENT_TOKEN_TO_BE_REPLACED

Although the book [Bridges to Consensus] is written with clergy in mind, I was instantly engrossed in the material and could see my way to using her s… END_OF_DOCUMENT_TOKEN_TO_BE_REPLACED

Margaret Anderson was instrumental in helping me hone my skills so that I could sort out, get clear, select, and land a “practically perfect” new busi… END_OF_DOCUMENT_TOKEN_TO_BE_REPLACED

It has been said that one of the best ways to teach is through story. In Love on the Rocks with a Twist, Margaret Anderson teaches the fine art of con… END_OF_DOCUMENT_TOKEN_TO_BE_REPLACED

Margaret Anderson’s presentation takes the wisdom of Ben Franklin’s stated virtue: “Speak not but what may benefit others or yourself” into the realm … END_OF_DOCUMENT_TOKEN_TO_BE_REPLACED

It [Bridges to Consensus] lends itself specifically to church issues, while making itself significantly useful for understanding communications in any… END_OF_DOCUMENT_TOKEN_TO_BE_REPLACED

While reading “Bridges to Consensus”, I volunteered to organize a project with my quilt bee, 15 professional, talented, and strongly-opinionated w… END_OF_DOCUMENT_TOKEN_TO_BE_REPLACED

Thank you. It was a pleasure attending your class. It taught me to ask “Why?” when I am trying to resolve an issue. I learned a lot and am happy I had… END_OF_DOCUMENT_TOKEN_TO_BE_REPLACED

I believe Bridges to Consensus applies to every facet of our lives… It doesn’t knock you over like a fire hose. It enters your spirit quietly and ge… END_OF_DOCUMENT_TOKEN_TO_BE_REPLACED

As a ghostwriter, I negotiate contracts often, and for “invisible” goods. …Margaret has taught me how to appeal to a prospect’s often hidden needs a… END_OF_DOCUMENT_TOKEN_TO_BE_REPLACED

The course was very interesting and learning the skill set in the classroom to apply in real life situations is invaluable.  It’s definitely about … END_OF_DOCUMENT_TOKEN_TO_BE_REPLACED

A Go-To Reference & Entertaining Read in One Book: Delightful fiction, indeed! Each of the stories is a standalone pleasure. I especially enjoyed the … END_OF_DOCUMENT_TOKEN_TO_BE_REPLACED