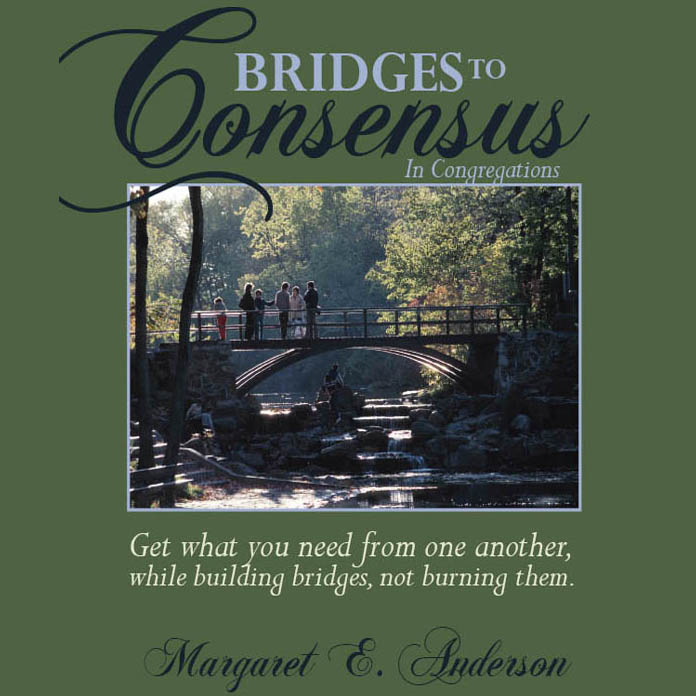 You might imagine that, when I teach a 1.5 hour mini-workshop on persuasion, I would cover the most basic element of my persuasion/consensus building system–uncovering and talking about what’s behind the things people say they want, their ultimate interests. But we require more than 1.5 hr. to assimilate that skill, take it away and use it to best advantage. We need more explanation, more examples, and very importantly, more practice exercises.

So for a short persuasion workshop, I focus on one of the persuasion skills I personally use most, such as paraphrasing. Trainees can learn enough from a short session to practice paraphrasing on their own.

Here’s a short version of what Bridges to Consensus tells us about paraphrasing:

To paraphrase, re-state the other person’s remark in different words…

The most obvious use of paraphrasing is to verify your understanding of another’s statement before you decide how to respond… I once heard a talk show host describe a situation in which a woman buys a new outfit for an important event and models it for a friend. The friend says, “That outfit is all wrong for you.” The talk show guests argued hammer and tongs about whether the friend had been unkind or helpful. I could see that the “helpful” proponents took the friend’s statement to mean that the outfit was inappropriate for the occasion, while most of the “unkind” proponents understood that it was unattractive.

Such misunderstandings can stem from different understandings of words per se, as in the example “all wrong for you.” They can also arise from the fact that people don’t always take in every word we say. Qualifiers like “sometimes,” or “it’s possible that,” or in the talk show example, “for you,” might not register…

Because the very nature of the problem lies in different understandings of a given series of words, paraphrasing requires that we use different words to restate the other person’s point. Say the lady in the talk show scenario thinks her friend finds her outfit unattractive, but the friend meant that it wouldn’t suit the occasion. The lady wants to be sure she understood correctly before expressing hurt feelings. If she says, “Are you saying this outfit is all wrong for me?” she won’t discover the disconnect. She repeated the same words that meant different things to her and her friend. However, “Are you saying the color makes me look washed out?” might do the trick. So might, “You mean it’s unsuitable for the occasion?”

In addition, correctly paraphrasing is the best way for you to get heard. When someone repeats the same point for the fourth time, that usually means she feels you didn’t get the point the first three times. Starting right in to argue your counterpoint reinforces her feeling. If you only understood her, she feels, you’d see it her way. So what does she do? While you present your flawless counterargument, she tunes you out and devises a better way to phrase her original point. Or worse, she doesn’t even wait for you to finish that flawless argument. She interrupts and shouts you down.

Accurately paraphrasing proves you got another person’s point, eliminating her urge to devise a better way to convince you. Now she’s ready to listen. The candy flower on the icing of this cake is that, when you prove you understand others, you come across as intelligent, and therefore, even more worth listening to.

This week, practice paraphrasing, but don’t start with difficult situations like major disagreements. As in learning to drive, don’t start on the freeway. Start in an empty parking lot. Plan for a time when you will have a casual, relaxed atmosphere, such as lunch with a coworker or friend. Don’t think of trying to persuade him of anything. Plan to paraphrase at least three innocuous statements statements. For example:

Practicing on innocuous statements is not just practice. It yields its own benefits. You’ll notice that your companion warms up to you more than usual. He might seem more relaxed. You enjoy each other’s company more. So you build a relationship while practicing a skill that will, later, come more naturally when you do wish to persuade someone.

Margaret Anderson’s presentation takes the wisdom of Ben Franklin’s stated virtue: “Speak not but what may benefit others or yourself” into the realm … END_OF_DOCUMENT_TOKEN_TO_BE_REPLACED

While reading “Bridges to Consensus”, I volunteered to organize a project with my quilt bee, 15 professional, talented, and strongly-opinionated w… END_OF_DOCUMENT_TOKEN_TO_BE_REPLACED

Thank you. It was a pleasure attending your class. It taught me to ask “Why?” when I am trying to resolve an issue. I learned a lot and am happy I had… END_OF_DOCUMENT_TOKEN_TO_BE_REPLACED

Although the book [Bridges to Consensus] is written with clergy in mind, I was instantly engrossed in the material and could see my way to using her s… END_OF_DOCUMENT_TOKEN_TO_BE_REPLACED

So much of our daily communication consists of argument, I’m delighted to learn new methods that remove the argument and place both parties on the roa… END_OF_DOCUMENT_TOKEN_TO_BE_REPLACED

My life has gone much more smoothly since taking your class.  Be it a discussion with…or a coworker, there is less stress and more preferable resul… END_OF_DOCUMENT_TOKEN_TO_BE_REPLACED

I believe Bridges to Consensus applies to every facet of our lives… It doesn’t knock you over like a fire hose. It enters your spirit quietly and ge… END_OF_DOCUMENT_TOKEN_TO_BE_REPLACED

It Strikes a Chord: I’ve spent a lifetime reading stories, and I’m not easy to please. This little pocketful kept me pleasurably engaged all the way t… END_OF_DOCUMENT_TOKEN_TO_BE_REPLACED

The course was very interesting and learning the skill set in the classroom to apply in real life situations is invaluable.  It’s definitely about … END_OF_DOCUMENT_TOKEN_TO_BE_REPLACED

As a ghostwriter, I negotiate contracts often, and for “invisible” goods. …Margaret has taught me how to appeal to a prospect’s often hidden needs a… END_OF_DOCUMENT_TOKEN_TO_BE_REPLACED

It [Bridges to Consensus] lends itself specifically to church issues, while making itself significantly useful for understanding communications in any… END_OF_DOCUMENT_TOKEN_TO_BE_REPLACED

Working with Margaret helped me understand that conflict does not automatically have to mean confrontation. Now I know how to seek solutions that bene… END_OF_DOCUMENT_TOKEN_TO_BE_REPLACED

Margaret Anderson was instrumental in helping me hone my skills so that I could sort out, get clear, select, and land a “practically perfect” new busi… END_OF_DOCUMENT_TOKEN_TO_BE_REPLACED

It has been said that one of the best ways to teach is through story. In Love on the Rocks with a Twist, Margaret Anderson teaches the fine art of con… END_OF_DOCUMENT_TOKEN_TO_BE_REPLACED

As a ghostwriter, I negotiate contracts often, and for “invisible” goods. …Margaret has taught me how to appeal to a prospect’s often hidden needs a… END_OF_DOCUMENT_TOKEN_TO_BE_REPLACED

A Go-To Reference & Entertaining Read in One Book: Delightful fiction, indeed! Each of the stories is a standalone pleasure. I especially enjoyed the … END_OF_DOCUMENT_TOKEN_TO_BE_REPLACED