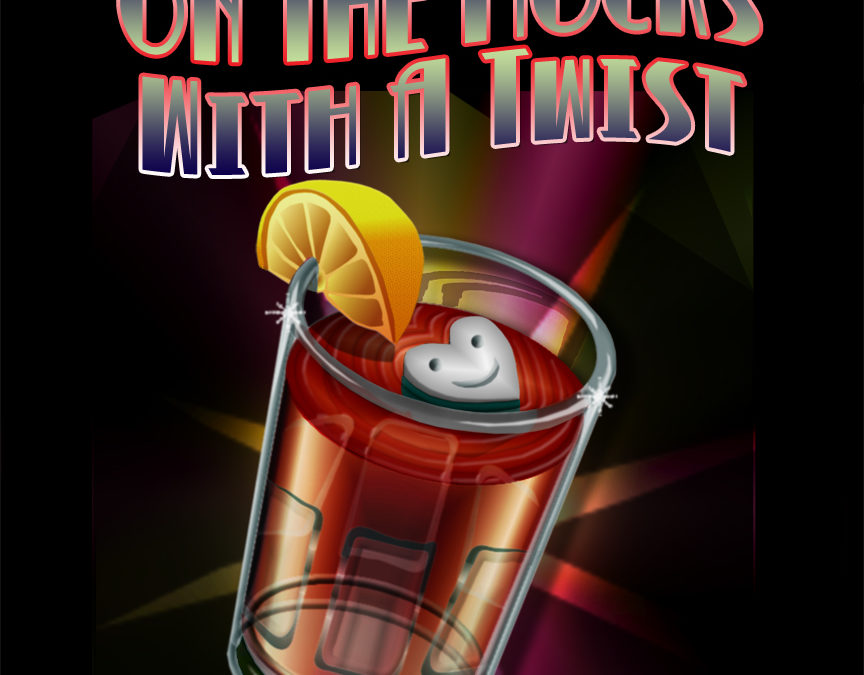 If you missed the excerpt, “What’s the twist,” from Love on the Rocks with a Twist, or it’s been awhile, you might like to read, or review it.

Now, here is an excerpt from the accompanying “Study Notes for What’s the Twist”:

“So much for the twist. Now here comes the lesson from this introductory essay: all of our protagonists are able to walk away, should they choose to, and to live happily for two reasons. First, these characters get clear on their Interests. Second, each of them has a strong BATNA [1], for which I’ve coined a more understandable term, ‘Walkaway Alternative.’

“Let’s look at the bottom line first, then, contrast the Walkaway Alternative. Let’s say a couple, Tess and Johnny, discuss taking a two-week vacation. Tess wants to stay in a nice hotel in a big city where her Aunt Mary and Uncle Bob live. Johnny wants to go camping at a state park.

“They could compromise, spend one week in the city and one week camping, but neither is happy with that plan. It doesn’t meet either Johnny’s or Tess’s bottom line.

“Suppose Johnny gives in to Tess. He agrees to spend ten days in the city and four days camping. Even then, Tess isn’t really happy because, truth be told, she doesn’t want to go camping at all. Conversely, if Tess gave in and agreed to spend ten days camping, Johnny wouldn’t be satisfied because he wants to spend as much time as possible in the park.

“To determine her Walkaway Alternative, Tess first clarifies her interestsby asking herself my Magic Question, ‘Why?’ Why does she want to spend two weeks in the city and no time camping. Her answers are:

“Tess has another interest with respect to the vacation. Though unrelated to why she prefers a city visit to camping out, this interest is an important one, and she adds it to the list:

“Now, Tess crafts a Walkaway Alternative plan. She looks at all the things she can do to satisfy her actual interests without any cooperation from Johnny. She lists everything, even options she doesn’t like, such as ‘Separate vacations, mine in the city, Johnny’s at the park.’

“I advise clients to list even unacceptable options because, sometimes, when we reflect on an unappealing idea, it inspires another idea that’s more acceptable. Tess’s spinoff idea might be acceptable to Johnny as well.

“For example, writing ‘separate vacations’ on her list might inspire Tess to think that, if Johnny would camp somewhere within an easy drive from the city, she could spend her nights in town and drive out to the park to hike with him during some of the days. But if Tess left ‘separate vacations’ off her list, she might not ever think of sleeping in town and visiting Johnny during some of the days.

“Tess comes up with the following list of Walkaway Options:

“Now Tess looks for ways to improve on these Walkaway Options and adds them, so that her list looks like this:

“Notice how including, “Give in, go camping,” on the list inspired Tess to think about ways to make even a total capitulation a bit more acceptable.

“Tess decides her best Walkaway Alternative is to take a vacation with her sister in the city where their aunt and uncle live. This is what she will do if she decides towalk awayfrom trying to reach agreement with Johnny.

“Note that Tess does not include the spin-off idea of spending her nights in town and visiting Johnny at the park during some of the days. That is not a Walkaway Option; it’s not something she can do all by herself…Johnny would have to agree with the plan…”

“Next, instead of trying to compromise with Johnny on the number of days they spend in the city, Tess tells him about the underlying interests she would like to satisfy: sleep in a real bed with easy access to a bathroom; stay near a restaurant; visit with Aunt Mary and Uncle Joe; and spend at least some vacation time with you.

“Next, she uncovers Johnny’s interests. She asks him the Magic Question…’Why do you want to spend all your time at the park?’ Johnny replies that he wants to…see as many different birds species as possible. Therefore, he wants to be in place in the woods just after dawn…also…at night…

“As they discuss ways to satisfy both sets of interests, it occurs to them that they could vacation at a national park that has a lodge and restaurant, such as Big Bend or Bryce Canyon. They could visit Tess’s Aunt Mary and Uncle Bob on the next long weekend or invite Mary and Bob to visit Tess and Johnny at their home.

“Now, comparing this plan with her best Walkaway Alternative, vacationing with her sister, Tess easily sees that her interests will be far better satisfied by vacationing at a park with lodge… And it satisfies Johnny’s interest in being in the park at dawn and at night.

“Even though the new plan puts Tess in the park day and night for the full two weeks, it satisfies her interests better than a compromise that would have met her bottom line of at least ten days in the city and no more than four days in the park. Interest-based discussion, assessed by means of a Walkaway Alternative, served both Tess and Johnny much better than numerical compromise assessed by bottom (or top) lines.”

[1] The acronym BATNA is used in various books from The Harvard Negotiation Project, such as the negotiation classic Getting to Yes by Roger Fisher and William Ury. It stands for “best alternative to a negotiated agreement.” Great concept, but you can see why I preferred to coin a term that is easier to understand and remember.

I believe Bridges to Consensus applies to every facet of our lives… It doesn’t knock you over like a fire hose. It enters your spirit quietly and ge… END_OF_DOCUMENT_TOKEN_TO_BE_REPLACED

It has been said that one of the best ways to teach is through story. In Love on the Rocks with a Twist, Margaret Anderson teaches the fine art of con… END_OF_DOCUMENT_TOKEN_TO_BE_REPLACED

It Strikes a Chord: I’ve spent a lifetime reading stories, and I’m not easy to please. This little pocketful kept me pleasurably engaged all the way t… END_OF_DOCUMENT_TOKEN_TO_BE_REPLACED

A Go-To Reference & Entertaining Read in One Book: Delightful fiction, indeed! Each of the stories is a standalone pleasure. I especially enjoyed the … END_OF_DOCUMENT_TOKEN_TO_BE_REPLACED

Thank you. It was a pleasure attending your class. It taught me to ask “Why?” when I am trying to resolve an issue. I learned a lot and am happy I had… END_OF_DOCUMENT_TOKEN_TO_BE_REPLACED

As a ghostwriter, I negotiate contracts often, and for “invisible” goods. …Margaret has taught me how to appeal to a prospect’s often hidden needs a… END_OF_DOCUMENT_TOKEN_TO_BE_REPLACED

The course was very interesting and learning the skill set in the classroom to apply in real life situations is invaluable.  It’s definitely about … END_OF_DOCUMENT_TOKEN_TO_BE_REPLACED

My life has gone much more smoothly since taking your class.  Be it a discussion with…or a coworker, there is less stress and more preferable resul… END_OF_DOCUMENT_TOKEN_TO_BE_REPLACED

Although the book [Bridges to Consensus] is written with clergy in mind, I was instantly engrossed in the material and could see my way to using her s… END_OF_DOCUMENT_TOKEN_TO_BE_REPLACED

Working with Margaret helped me understand that conflict does not automatically have to mean confrontation. Now I know how to seek solutions that bene… END_OF_DOCUMENT_TOKEN_TO_BE_REPLACED

It [Bridges to Consensus] lends itself specifically to church issues, while making itself significantly useful for understanding communications in any… END_OF_DOCUMENT_TOKEN_TO_BE_REPLACED

So much of our daily communication consists of argument, I’m delighted to learn new methods that remove the argument and place both parties on the roa… END_OF_DOCUMENT_TOKEN_TO_BE_REPLACED

Margaret Anderson’s presentation takes the wisdom of Ben Franklin’s stated virtue: “Speak not but what may benefit others or yourself” into the realm … END_OF_DOCUMENT_TOKEN_TO_BE_REPLACED

As a ghostwriter, I negotiate contracts often, and for “invisible” goods. …Margaret has taught me how to appeal to a prospect’s often hidden needs a… END_OF_DOCUMENT_TOKEN_TO_BE_REPLACED

Margaret Anderson was instrumental in helping me hone my skills so that I could sort out, get clear, select, and land a “practically perfect” new busi… END_OF_DOCUMENT_TOKEN_TO_BE_REPLACED

While reading “Bridges to Consensus”, I volunteered to organize a project with my quilt bee, 15 professional, talented, and strongly-opinionated w… END_OF_DOCUMENT_TOKEN_TO_BE_REPLACED