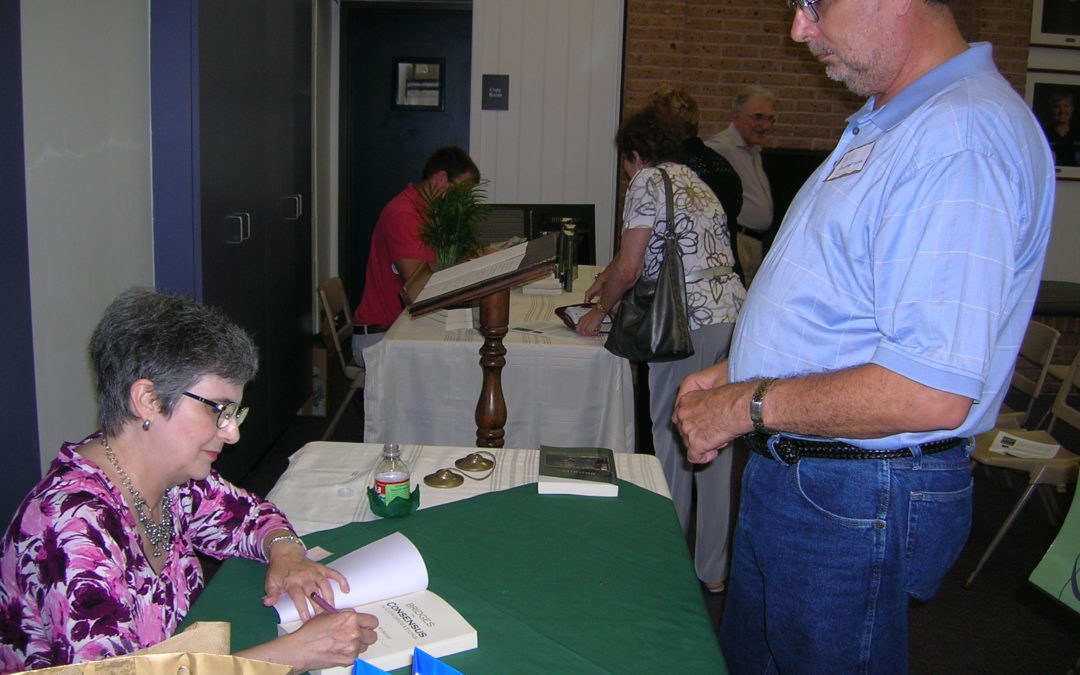 Many, many thanks for your patience with my infrequent blog posting lately. I think you’ll approve of the reasons, however. One is that we’re working on a wonderful new web site. I can’t wait to show it off. The other is that I’m on a roll with my third book, Talking about Touchy Topics.

Today, I offer one of the short stories from my 2nd book Love on the Rocks with a Twist—Delightful Fiction with Lessons on Dealing with Others.

I was digging a hole for a peach tree sapling—hot work. Sweat cools us when it evaporates. Make that ifit evaporates. Here, where summer humidity rarely drops below seventy-five percent, sweat condenses into bigger and bigger drops till it runs down the body in tepid rivulets, trickling into your eyes and ears, down your cleavage and between your buns, soaking your clothes, plastering your hair to your scalp, and turning each gardening boot into a swimming pool for foot fungi.

Hot work, and difficult. The soil had a lot of hard, dense clay in it. Jumping on the shovel with both feet barely made a dent. Only the thought of sweet, tree-ripened peaches, a year or two down the road, kept me pounding away at that clay.

Dropping the shovel, I pried off my boots and padded inside for a cool drink and a browse through the newspaper. A three-word title near the bottom of the second page pushed my pause button, “Science Reporter Resigns.”

I suppose some part of the brain stays busy when we’re on pause, deciding what conscious thoughts to spawn, but I couldn’t feel it. Couldn’t feel anything for a while. Finally noticed my wet hand resting in the puddle around the bottom of my glass. Didn’t move it. Didn’t dry it.

He’d move away, no doubt. How many science reporters did one town need? I’d have no second chance now. No time for him to tire of the doe-eyed damsel who had insinuated herself between us.

What to do? My instincts demanded closure. How many times had I imagined the piece of my mind I’d like to give him? Maybe I can’t bring myself to make doe eyes, but I’ve never trampled over men like your damsel has. My own cousin, Steve, filed for divorce over her. The day after his wife was served, the day after, Doe Eyes texted him a Dear John. Mind you, she didn’t dump Steve till she had another guy lined up. Probably has your replacement in her sights already.

But would saying my piece bring me peace? He wouldn’t believe any of it. He’d only think worse of me. Was getting it all off my chest worth that? After all, he was a science reporter, and I was a scientist, a scientist who wanted attention for her work. I could at least say goodbye, I supposed, and wish him well. That was only common courtesy—more than courtesy, actually. It would be the classy thing to do.

Scanning my sweaty clothes, I found a dry spot just above the knee, wiped my hand and reached for the phone. But memories sent that hand back to the tabletop. Visions of that narcissistic blight of a woman he’d preferred to me curled my lip in a sneer as sour as the feeling in my gut.

What to say to him? “Goodbye and good luck” or “Your girlfriend is evil incarnate.” Good will or closure? Some choice.

What did I really want anyway? If Doe Eyes dumped my former flame today, would I really want him back? Was this about love for him or about my own wounded pride? If I were granted one wish and had to take it this minute, what would I wish for? Closing my eyes, I turned off the head talk by focusing on the word “want” and let mental images and sensations waft through me.

I found myself in my ratty lawn chair,gazing at the blue summer sky. I saw him, like a movie in the sky, loading his last packing box into a rental truck, getting into the cab and driving away. The truck grew smaller and smaller till it disappeared far away, someplace I didn’t know, someplace where I couldn’t contact him if I wanted to.

Splashes of color appeared before me—yellow, orange, warm pink. They coalesced into peaches. Peaches so ripe you had to hold a napkin under your chin when you bit into them. I lolled in my chair slurping a sweet, Texas freestone—pure bliss.

When I opened my eyes, they returned to the newspaper. That three-word title had stunned me so that I had never read the article below it. I read it now. He’d resigned “to pursue other interests,” would be teaching a journalism course at our local Community College. A reprieve. Time for me to wait till he tired of her, or vice versa.

The weight of him descended like a load of that hard backyard clay onto my shoulders, and my reverie made sense. What I really, really wanted was to put him back on that moving truck. I wanted him out of my life and off my mind. I wanted to find my bliss.

I went to my desk, deleted him from my email address book and my phone contacts, blocked him on Facebook. Then I changed my clothes, drove to the farmers’ market, and bought a peck of peaches.

Stay tuned. I’ll post the study notes for “Peaches” soon. Meanwhile, let me know you you like the story.

Margaret Anderson’s presentation takes the wisdom of Ben Franklin’s stated virtue: “Speak not but what may benefit others or yourself” into the realm … END_OF_DOCUMENT_TOKEN_TO_BE_REPLACED

While reading “Bridges to Consensus”, I volunteered to organize a project with my quilt bee, 15 professional, talented, and strongly-opinionated w… END_OF_DOCUMENT_TOKEN_TO_BE_REPLACED

Thank you. It was a pleasure attending your class. It taught me to ask “Why?” when I am trying to resolve an issue. I learned a lot and am happy I had… END_OF_DOCUMENT_TOKEN_TO_BE_REPLACED

Although the book [Bridges to Consensus] is written with clergy in mind, I was instantly engrossed in the material and could see my way to using her s… END_OF_DOCUMENT_TOKEN_TO_BE_REPLACED

So much of our daily communication consists of argument, I’m delighted to learn new methods that remove the argument and place both parties on the roa… END_OF_DOCUMENT_TOKEN_TO_BE_REPLACED

My life has gone much more smoothly since taking your class.  Be it a discussion with…or a coworker, there is less stress and more preferable resul… END_OF_DOCUMENT_TOKEN_TO_BE_REPLACED

I believe Bridges to Consensus applies to every facet of our lives… It doesn’t knock you over like a fire hose. It enters your spirit quietly and ge… END_OF_DOCUMENT_TOKEN_TO_BE_REPLACED

It Strikes a Chord: I’ve spent a lifetime reading stories, and I’m not easy to please. This little pocketful kept me pleasurably engaged all the way t… END_OF_DOCUMENT_TOKEN_TO_BE_REPLACED

The course was very interesting and learning the skill set in the classroom to apply in real life situations is invaluable.  It’s definitely about … END_OF_DOCUMENT_TOKEN_TO_BE_REPLACED

As a ghostwriter, I negotiate contracts often, and for “invisible” goods. …Margaret has taught me how to appeal to a prospect’s often hidden needs a… END_OF_DOCUMENT_TOKEN_TO_BE_REPLACED

It [Bridges to Consensus] lends itself specifically to church issues, while making itself significantly useful for understanding communications in any… END_OF_DOCUMENT_TOKEN_TO_BE_REPLACED

Working with Margaret helped me understand that conflict does not automatically have to mean confrontation. Now I know how to seek solutions that bene… END_OF_DOCUMENT_TOKEN_TO_BE_REPLACED

Margaret Anderson was instrumental in helping me hone my skills so that I could sort out, get clear, select, and land a “practically perfect” new busi… END_OF_DOCUMENT_TOKEN_TO_BE_REPLACED

It has been said that one of the best ways to teach is through story. In Love on the Rocks with a Twist, Margaret Anderson teaches the fine art of con… END_OF_DOCUMENT_TOKEN_TO_BE_REPLACED

As a ghostwriter, I negotiate contracts often, and for “invisible” goods. …Margaret has taught me how to appeal to a prospect’s often hidden needs a… END_OF_DOCUMENT_TOKEN_TO_BE_REPLACED

A Go-To Reference & Entertaining Read in One Book: Delightful fiction, indeed! Each of the stories is a standalone pleasure. I especially enjoyed the … END_OF_DOCUMENT_TOKEN_TO_BE_REPLACED