Why Do You Celebrate Christmas? 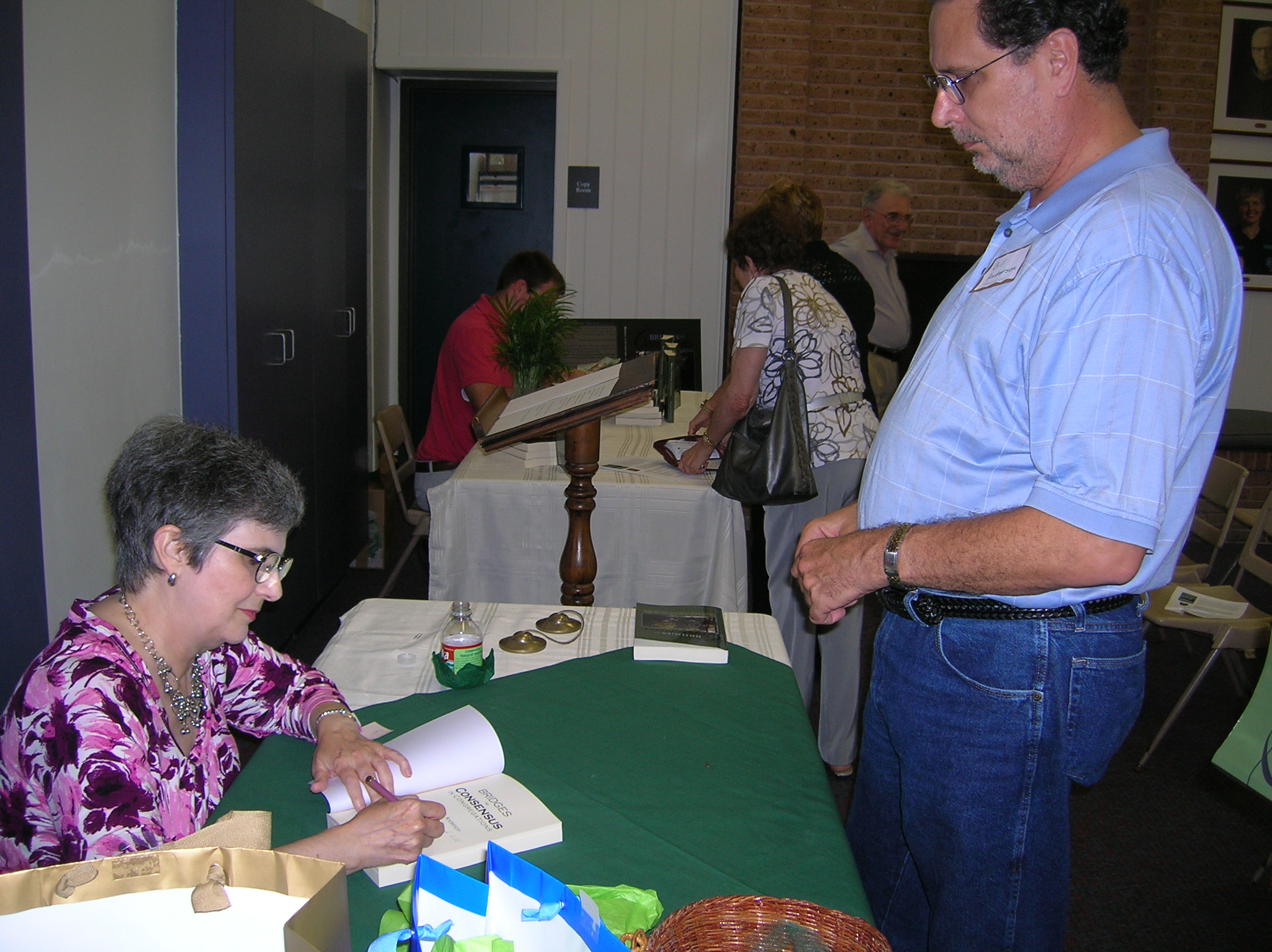 [Image is Margaret at a book signing.]

I recently practiced seeking commonalities in a difference of opinion between blogger Catherine Onyemelukwe and her spouse, Clem. Catherine had blogged, “Every year my husband complains…’You Unitarians don’t believe in Christ. So why do you celebrate Christmas?’” Catherine continued, “I’ve tried many explanations; none is satisfactory. Do you have an answer for…his questions?”

Ideas of what it means to “believe in Christ” vary widely. People may mean one or more of the following:

But I see common ground in all kinds of Christians, not in what they believe about Jesus, but in what they do in practice. The majority of Christians try to live by the teachings and good examples attributed to Jesus in the gospels.

The teachings and behaviors actually described in the gospels mostly boil down to opening up one’s heart and mind, treating others with love, kindness, generosity. Jesus reached out to the marginalized, those his peers looked down on—lepers, tax collectors, Samaritans, prostitutes, and women in general.

It seems that Jesus’s earliest followers, those closest to him in history and memory, understood the main thrust of his teachings as I do. They reached out and helped others. Some groups pooled resources so that everyone got enough to eat.

Unitarian Universalism [sometimes referred to as “UU” hereafter] does not require belief in Christ or any other dogma. But it doesn’t forbid belief in dogma either. Some UUs, even some ministers, identify as Christians. But more importantly, UU-ism focuses on helping others, especially the disadvantaged.

I have always thought of Christmas time, when it has come round–apart from the veneration due to its sacred name and origin, if anything belonging to it can be apart from that–as a good time; a kind, forgiving, charitable, pleasant time; the only time I know of…when [people] seem by one consent to open their shut-up hearts freely, and to think of people below them as if they really were fellow-passengers to the grave, and not another race of creatures bound on other journeys. And therefore, uncle, though it has never put a scrap of gold or silver in my pocket, I believe that it has done me good, and will do me good; and I say, God bless it!” [Emphasis mine]

Through Fred, Dickens, an Anglican, suggests that he doesn’t know if we can separate this “kind, forgiving, charitable” spirit from it’s religious associations, but whether or not we can separate it, that spirit clearly prevails at Christmas time. I submit that celebrating Christmas, whether in church or around the family dinner table, fosters that spirit.

The Christian gospels, the early followers of Jesus, Unitarian Universalism, and the spirit of Christmas share commonalities in their very essences: kindness, generosity, opening our “shut-up hearts freely,” and helping those less fortunate. Celebrating Christmas helps people get into that “kind, forgiving, charitable” spirit. In that spirit, people are more likely to do what Jesus wanted—help others.

Yes, people get frenzied and stressed about decorating, shopping and cooking. Sometimes they lose their tempers. Some people steal presents from front porches and cars.

But more often, I notice people being more friendly, polite and generous at this time of year. They smile and greet strangers. Saturday, the baking supplies aisle at HEB was gridlocked. Yet, no one groused, pushed or shoved. Rather, they held back and gestured others to pass them. A thief stole presents from a woman’s car in a repair shop yard. Ordinary people quickly replaced the presents.

Don’t we want all people to enter into this “kind, forgiving, charitable” spirit of Christmas, no matter what they do or don’t believe? Don’t we wish everyone would reach out generously to those who aren’t as fortunate?

So, taking a cue from Scrooge’s nephew, I think that, if Catherine’s church’s Christmas service inspires kindness and generosity, then it has done the world good, and will do the world good; and I say, God bless it, with all its commonalities!

As a ghostwriter, I negotiate contracts often, and for “invisible” goods. …Margaret has taught me how to appeal to a prospect’s often hidden needs a… END_OF_DOCUMENT_TOKEN_TO_BE_REPLACED

Working with Margaret helped me understand that conflict does not automatically have to mean confrontation. Now I know how to seek solutions that bene… END_OF_DOCUMENT_TOKEN_TO_BE_REPLACED

My life has gone much more smoothly since taking your class.  Be it a discussion with…or a coworker, there is less stress and more preferable resul… END_OF_DOCUMENT_TOKEN_TO_BE_REPLACED

So much of our daily communication consists of argument, I’m delighted to learn new methods that remove the argument and place both parties on the roa… END_OF_DOCUMENT_TOKEN_TO_BE_REPLACED

It Strikes a Chord: I’ve spent a lifetime reading stories, and I’m not easy to please. This little pocketful kept me pleasurably engaged all the way t… END_OF_DOCUMENT_TOKEN_TO_BE_REPLACED

Although the book [Bridges to Consensus] is written with clergy in mind, I was instantly engrossed in the material and could see my way to using her s… END_OF_DOCUMENT_TOKEN_TO_BE_REPLACED

Margaret Anderson was instrumental in helping me hone my skills so that I could sort out, get clear, select, and land a “practically perfect” new busi… END_OF_DOCUMENT_TOKEN_TO_BE_REPLACED

It has been said that one of the best ways to teach is through story. In Love on the Rocks with a Twist, Margaret Anderson teaches the fine art of con… END_OF_DOCUMENT_TOKEN_TO_BE_REPLACED

Margaret Anderson’s presentation takes the wisdom of Ben Franklin’s stated virtue: “Speak not but what may benefit others or yourself” into the realm … END_OF_DOCUMENT_TOKEN_TO_BE_REPLACED

It [Bridges to Consensus] lends itself specifically to church issues, while making itself significantly useful for understanding communications in any… END_OF_DOCUMENT_TOKEN_TO_BE_REPLACED

While reading “Bridges to Consensus”, I volunteered to organize a project with my quilt bee, 15 professional, talented, and strongly-opinionated w… END_OF_DOCUMENT_TOKEN_TO_BE_REPLACED

Thank you. It was a pleasure attending your class. It taught me to ask “Why?” when I am trying to resolve an issue. I learned a lot and am happy I had… END_OF_DOCUMENT_TOKEN_TO_BE_REPLACED

I believe Bridges to Consensus applies to every facet of our lives… It doesn’t knock you over like a fire hose. It enters your spirit quietly and ge… END_OF_DOCUMENT_TOKEN_TO_BE_REPLACED

As a ghostwriter, I negotiate contracts often, and for “invisible” goods. …Margaret has taught me how to appeal to a prospect’s often hidden needs a… END_OF_DOCUMENT_TOKEN_TO_BE_REPLACED

The course was very interesting and learning the skill set in the classroom to apply in real life situations is invaluable.  It’s definitely about … END_OF_DOCUMENT_TOKEN_TO_BE_REPLACED

A Go-To Reference & Entertaining Read in One Book: Delightful fiction, indeed! Each of the stories is a standalone pleasure. I especially enjoyed the … END_OF_DOCUMENT_TOKEN_TO_BE_REPLACED