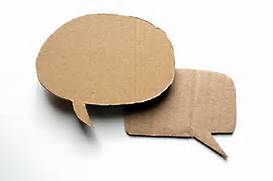 Several years ago, I attended an awards banquet for engineers. One of the presenters opened with a riddle:

A: The extroverted engineer looks at your feet when he’s talking to you.

Now, as Jay Leno used to say, “Don’t write me a letter” about how introversion is not the same as shyness. Still, I believe most of us, introverts or extroverts, bashful or bold, have had occasions to admire those who always say just the right thing, and say it easily and naturally, whether making small talk at a party or inspiring breakthroughs at a negotiation table. They seem to have a natural talent that most of us lack.

But guess what? Those who sound most natural and unrehearsed when saying just the right thing are often those who plan ahead and prepare things to say at the party or the business conference.

The life of the party this evening took a second or two before lunch to call herself to mindfulness. Then, if she ate with coworkers, she took note of topics in their lunch conversation that she might introduce tonight. If she ate alone, she browsed a magazine, again taking note of topics that are interesting, but not controversial or upsetting, to the average person.

While driving to the party, she thought about acquaintances she might meet there and questions she might ask them based on what she knows, or thinks, is going on in their lives.

She didn’t spend a lot of extra time. She would have had lunch anyway, either with her colleagues or with a magazine. All she did was remind herself to listen out, or look out, for interesting topics. She would have spent the same amount of time driving to the party whether she thought about what might be going on with her friends or about what she might have for dinner tomorrow.

Those who feel a bit shy or awkward in social settings can invest in just a little more time to practice aloud, and perhaps even in front of the mirror.

Even when one is headed to the business negotiation, rather than to the party, it helps to have a few small talk topics in mind. These can break the ice at the beginning of the meeting or loosen up things (and people) during breaks.

In addition, as my readers know very well, good negotiators also prepare their business talk, not only what to say, but how to say it. For example, suppose Chris is negotiating to purchase a house. It is now early July. The seller’s asking price is $10,000 over the price paid for the most nearly identical home sold in this neighborhood so far this summer. The school year will start August 15. Chris does not have any school-aged children, and is currently renting on a month-to-month basis. So, while Chris can afford to wait for just the right house, the seller’s negotiation strength lessens with the approach of the school year. The fact that the house is overpriced will add to the decreasing chances of selling as time passes.

In short, the seller is in a weak position, which will likely grow weaker in a matter of weeks it. Steering a person toward consideration of weaknesses in his position is one of the trickiest topics to broach without putting that person off.

Instead of overtly stating the weaknesses he sees in the seller’s position, Chris might prepare questions like, “What standards can we look at for guidance as to the value of this house?” and “As the school year draws closer, how will that affect things?” The use of questions, rather than statements, reduces offensiveness, and I especially recommend practicing them aloud in front of the mirror in this type of situation. Indeed, if the negotiation is particularly important, practicing with a friend or acquaintance playing the role of the other party is also a good investment.[1]

One caveat about preparing questions and phrases for use in negotiation or other persuasive endeavors: don’t lock into them or rehearse them so much that they will pop out of your mouth as soon as they hear a cue from the other person. If you are tempted this way, it helps to prepare several alternative questions or statements for handling each anticipated issue.

And always remember, the phrases you craft are tools, not rules. Be prepared to go with the flow of the conversation.

[1] See Chapter 10 of Bridges to Consensus and my article on “Questions and Personal Examples—a Persuasive Duo” for more on crafting and using open questions.

Although the book [Bridges to Consensus] is written with clergy in mind, I was instantly engrossed in the material and could see my way to using her s… END_OF_DOCUMENT_TOKEN_TO_BE_REPLACED

It has been said that one of the best ways to teach is through story. In Love on the Rocks with a Twist, Margaret Anderson teaches the fine art of con… END_OF_DOCUMENT_TOKEN_TO_BE_REPLACED

Thank you. It was a pleasure attending your class. It taught me to ask “Why?” when I am trying to resolve an issue. I learned a lot and am happy I had… END_OF_DOCUMENT_TOKEN_TO_BE_REPLACED

As a ghostwriter, I negotiate contracts often, and for “invisible” goods. …Margaret has taught me how to appeal to a prospect’s often hidden needs a… END_OF_DOCUMENT_TOKEN_TO_BE_REPLACED

My life has gone much more smoothly since taking your class.  Be it a discussion with…or a coworker, there is less stress and more preferable resul… END_OF_DOCUMENT_TOKEN_TO_BE_REPLACED

Margaret Anderson’s presentation takes the wisdom of Ben Franklin’s stated virtue: “Speak not but what may benefit others or yourself” into the realm … END_OF_DOCUMENT_TOKEN_TO_BE_REPLACED

While reading “Bridges to Consensus”, I volunteered to organize a project with my quilt bee, 15 professional, talented, and strongly-opinionated w… END_OF_DOCUMENT_TOKEN_TO_BE_REPLACED

Margaret Anderson was instrumental in helping me hone my skills so that I could sort out, get clear, select, and land a “practically perfect” new busi… END_OF_DOCUMENT_TOKEN_TO_BE_REPLACED

So much of our daily communication consists of argument, I’m delighted to learn new methods that remove the argument and place both parties on the roa… END_OF_DOCUMENT_TOKEN_TO_BE_REPLACED

As a ghostwriter, I negotiate contracts often, and for “invisible” goods. …Margaret has taught me how to appeal to a prospect’s often hidden needs a… END_OF_DOCUMENT_TOKEN_TO_BE_REPLACED

The course was very interesting and learning the skill set in the classroom to apply in real life situations is invaluable.  It’s definitely about … END_OF_DOCUMENT_TOKEN_TO_BE_REPLACED

A Go-To Reference & Entertaining Read in One Book: Delightful fiction, indeed! Each of the stories is a standalone pleasure. I especially enjoyed the … END_OF_DOCUMENT_TOKEN_TO_BE_REPLACED

I believe Bridges to Consensus applies to every facet of our lives… It doesn’t knock you over like a fire hose. It enters your spirit quietly and ge… END_OF_DOCUMENT_TOKEN_TO_BE_REPLACED

It Strikes a Chord: I’ve spent a lifetime reading stories, and I’m not easy to please. This little pocketful kept me pleasurably engaged all the way t… END_OF_DOCUMENT_TOKEN_TO_BE_REPLACED

Working with Margaret helped me understand that conflict does not automatically have to mean confrontation. Now I know how to seek solutions that bene… END_OF_DOCUMENT_TOKEN_TO_BE_REPLACED

It [Bridges to Consensus] lends itself specifically to church issues, while making itself significantly useful for understanding communications in any… END_OF_DOCUMENT_TOKEN_TO_BE_REPLACED