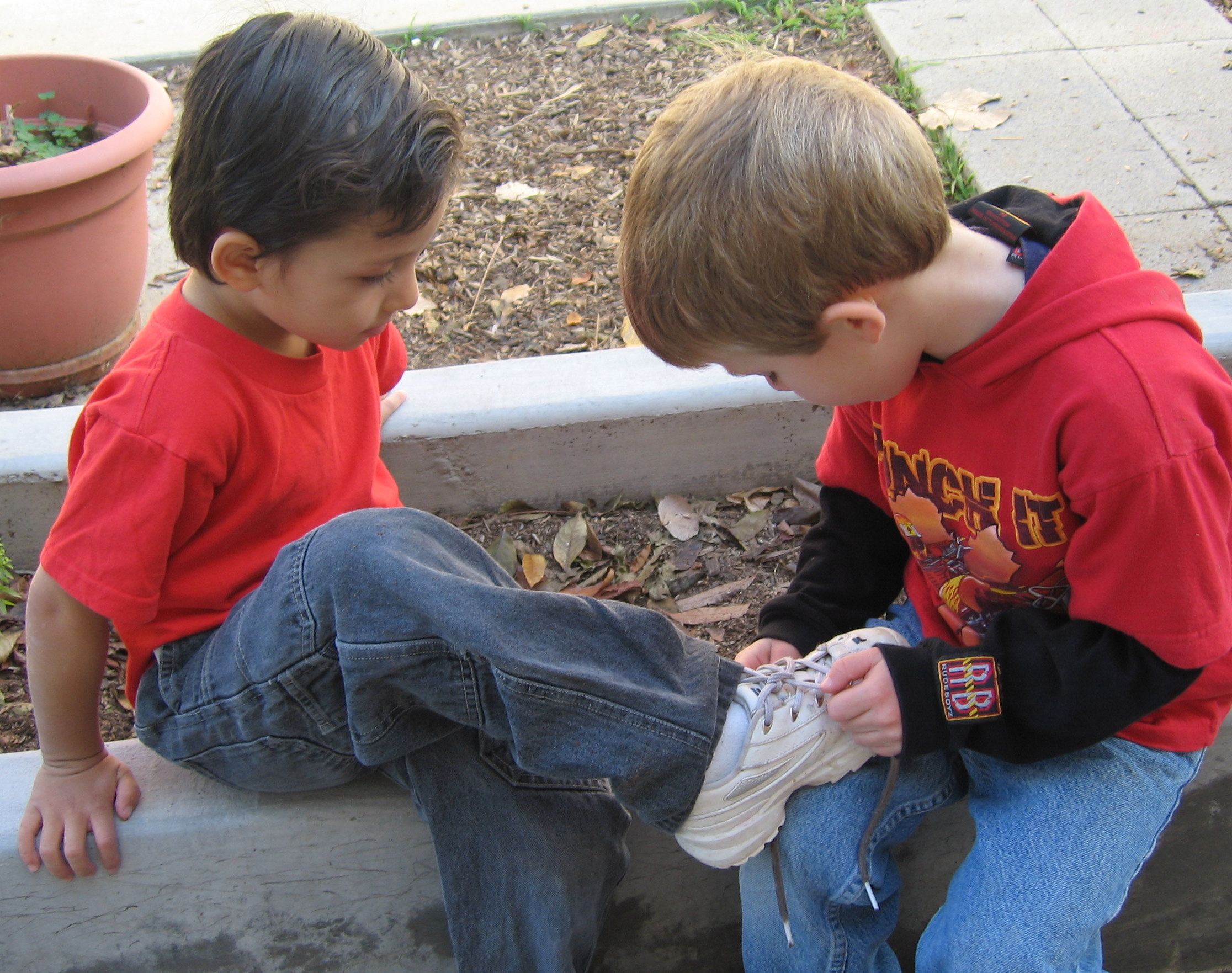 I often compare the skills I teach—whether applied to negotiation, consensus building or persuasion—to means for building bridges, rather than burning them. We can also think of these communication skills as bridges over difficulties or bridges to desired results. More specifically, the way we communicate can build bridges to character in the young (and sometimes the not so young).

Surveys show that, all over the world, parents agree on the results they desire for their children. They favor building a kind, caring character over fostering the child’s success. Recent studies also show us the most effective ways to build bridges to good behavior for the young, and perhaps the not so young.[1]

All of us, even children, want to think of ourselves as good people. When we ask a child to be a helpful person, we help her envision herself as a good person. People live up to good self-images.

Those who are taught not to “be a cheater” turn out more honest than those who are taught not to “cheat.” However, it is not helpful to label the child as “a cheater,” after he actually has cheated on a test at school. People live down to bad self-images. They respond better to guilt—the feeling that they are good people who did something wrong—than to shame—the feeling that they are bad people. In fact, a childhood heavy in shaming can produce disastrous results.

So, once the deed is done, it’s better to say something like, “I know you’re a good boy. So I was disappointed when I heard that you cheated on your test. I know you can do better next time.”

It’s also important to remember that we are only talking here about morals and ethics, in other words, behaviors that don’t require particular talents. If a child plays well at basketball, it’s better to say that she played well than to say that she is a hotshot player. If she builds a self-image as a hotshot player, then fails to get an athletic scholarship for college, she’s likely to come crashing down harder then if she simply thought of herself as having played well in high school.

One particular type of ethical behavior, generosity, has been shown to have an additional twist. In some studies, an adult modeled either selfish or generous behavior while playing a game. Then the adult lectured the children, advocating either selfishness or generosity.

But, and here’s the real kicker, the highest levels of generosity in the children resulted when the adult did not lecture at all, but simply modeled generous behavior.

Here’s another twist from my own experience. Both my parents modeled considerate behavior. Consideration for others is a form of generosity, but it sometimes requires more empathy. Sharing one’s cake is easy for a child to observe and imitate. But if Mom is getting ready for a party in honor of a friend, and chooses a simple, understated outfit, it’s not readily apparent if she did so because she doesn’t want to outshine the party honoree.

Hand in hand with modeling consideration, my parents often explained their choices to us in terms of how they imagined their actions would affect others. Thus, they taught us to look at things from others’ perspectives. This skill has proved a huge asset to me in successful negotiation and consensus building.

All this begs the question, “Does age matter?” Can we teach an old dog new ethical tricks? The NPR article cited below indicates that adults are more likely to vote if asked to “be a voter” than if they are simply asked to vote.

On the other hand, the New York Times article indicates that, with children, we must instill moral and ethical behavior between the ages of 6 and 10 in order for those lessons to last. Younger children don’t get it, and older children show only temporary improvements.

The answer to what helps an adult adopt higher ethical standards is no doubt more complex, and could involve factors such as real life experiences that make strong impressions. I know of a man who became more generous after a bad accident that he only narrowly survived, but I would not recommend pushing someone down the stairs in hope of instilling generosity.

For myself, I would go ahead and try the techniques that work best with children in attempting to influence an adult to behave in a moral or ethical manner. It’s hard to imagine how those techniques could hurt, and even if they only help temporarily, sometimes a temporary improvement is all we need when dealing with an adult. Sometimes it’s enough to simply persuade that adult to behave ethically in the situation at hand, then, just move on.

[1] Maanvi Singh, “To Get Help from a Little Kid, Ask the Right Way, NPR, http://www.npr.org/blogs/health/2014/04/30/308045913/to-get-help-from-a-little-kid-ask-the-right-way?utm_term=nprnews&utm_content=buffer03b50&utm_medium=social&utm_source=facebook.com&utm_campaign=buffer.

Although the book [Bridges to Consensus] is written with clergy in mind, I was instantly engrossed in the material and could see my way to using her s… END_OF_DOCUMENT_TOKEN_TO_BE_REPLACED

I believe Bridges to Consensus applies to every facet of our lives… It doesn’t knock you over like a fire hose. It enters your spirit quietly and ge… END_OF_DOCUMENT_TOKEN_TO_BE_REPLACED

My life has gone much more smoothly since taking your class.  Be it a discussion with…or a coworker, there is less stress and more preferable resul… END_OF_DOCUMENT_TOKEN_TO_BE_REPLACED

It [Bridges to Consensus] lends itself specifically to church issues, while making itself significantly useful for understanding communications in any… END_OF_DOCUMENT_TOKEN_TO_BE_REPLACED

It Strikes a Chord: I’ve spent a lifetime reading stories, and I’m not easy to please. This little pocketful kept me pleasurably engaged all the way t… END_OF_DOCUMENT_TOKEN_TO_BE_REPLACED

Working with Margaret helped me understand that conflict does not automatically have to mean confrontation. Now I know how to seek solutions that bene… END_OF_DOCUMENT_TOKEN_TO_BE_REPLACED

A Go-To Reference & Entertaining Read in One Book: Delightful fiction, indeed! Each of the stories is a standalone pleasure. I especially enjoyed the … END_OF_DOCUMENT_TOKEN_TO_BE_REPLACED

As a ghostwriter, I negotiate contracts often, and for “invisible” goods. …Margaret has taught me how to appeal to a prospect’s often hidden needs a… END_OF_DOCUMENT_TOKEN_TO_BE_REPLACED

The course was very interesting and learning the skill set in the classroom to apply in real life situations is invaluable.  It’s definitely about … END_OF_DOCUMENT_TOKEN_TO_BE_REPLACED

So much of our daily communication consists of argument, I’m delighted to learn new methods that remove the argument and place both parties on the roa… END_OF_DOCUMENT_TOKEN_TO_BE_REPLACED

As a ghostwriter, I negotiate contracts often, and for “invisible” goods. …Margaret has taught me how to appeal to a prospect’s often hidden needs a… END_OF_DOCUMENT_TOKEN_TO_BE_REPLACED

While reading “Bridges to Consensus”, I volunteered to organize a project with my quilt bee, 15 professional, talented, and strongly-opinionated w… END_OF_DOCUMENT_TOKEN_TO_BE_REPLACED

It has been said that one of the best ways to teach is through story. In Love on the Rocks with a Twist, Margaret Anderson teaches the fine art of con… END_OF_DOCUMENT_TOKEN_TO_BE_REPLACED

Margaret Anderson’s presentation takes the wisdom of Ben Franklin’s stated virtue: “Speak not but what may benefit others or yourself” into the realm … END_OF_DOCUMENT_TOKEN_TO_BE_REPLACED

Thank you. It was a pleasure attending your class. It taught me to ask “Why?” when I am trying to resolve an issue. I learned a lot and am happy I had… END_OF_DOCUMENT_TOKEN_TO_BE_REPLACED

Margaret Anderson was instrumental in helping me hone my skills so that I could sort out, get clear, select, and land a “practically perfect” new busi… END_OF_DOCUMENT_TOKEN_TO_BE_REPLACED