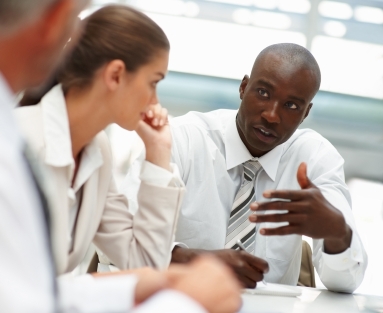 Have you heard the expression “Less is more”? It certainly rings true in the field of consensus building, persuasion and related communication skills, particularly with respect to how and where we focus our attention. But before I explain why, let’s look at how attention works in general.

If you didn’t catch the National Geographic Channel program “Brain Games—Pay Attention,” look for a rerun or watch it online at:  http://channel.nationalgeographic.com/channel/brain-games/videos/brain-games-pay-attention/  Play the games throughout the show and watch it all the way through. You’ll find, among other things, that, when you focus on one aspect of a scene, such as counting how many times dancers enter a pool of light on stage, you don’t even see that someone in a giant penguin costume mingled with the dancers during a portion of their performance.

Likewise, you’ll learn that multi tasking is a myth. When we think we’re doing two things at once, we’re actually quickly switching our attention between the two things. Consequently, we don’t perform either as well as we could.

Even before playing these brain games, I had observed this in my own life. I enjoy “watching” TV documentaries. However, I’ve found that, in some of them, like history documentaries, I don’t really have to look at all the visuals to get the message. In fact, some of the visuals become a bit repetitious and boring. So I often listen to the documentary while playing solitaire on my lap, glancing up at the TV occasionally.

I’ve learned that I win fewer games of solitaire when I’m listening to a documentary at the same time. If I pause the TV for some reason, say a drink of water, then look again at the game on my lap, I see moves I had missed. Conversely, when I watch a show without playing at the same time, like the Brain Games programs where the visuals are important, I have fewer occasions to back up and replay a bit I didn’t catch.

Now, since I‘m only watching the historical documentary for amusement, and likewise, only playing solitaire for amusement, performing those two things poorly is no great loss. So what if I miss a solitaire play or have to back up and replay part of the show? But knowing how multitasking affects both of these simple tasks has taught me to focus my attention as fully as possible when performing an important task, such as driving.

If you believe that talking on the phone hands free while driving is safe, “Brain Games—Pay Attention” will change your mind. You’ll see how an experienced “multi-tasker” goofs up on a test track while answering simple questions over his headset—veering off onto the snow-covered verge and going into a skid, crashing into a beach ball that rolled into his path, and more.

There have been many tests and studies on this. Time and time again, they show that the difference between driving while holding the phone, on the one hand, and talking with a headset or speaker, on the other hand, is negligible, even for young people whose reflexes are better than mine.

A while back, the Oprah show featured a number of such experiments, plus interviews with people who had hurt or killed someone while using the phone in their car, and never recovered from the guilt. After watching that, I took Oprah’s pledge not to use the phone while driving and not to talk on the phone to others while they are driving.

Against this background, let’s turn to interpersonal communication. When you’re engaged in a consensus-seeking interaction, or any other important conversation, less is more—less ambient noise, less visual distraction, less mind wandering. I’ve often said that enlightened communication skills can change your life, but I’ve never said they’re effortless. The more fully you focus your attention on the matter at hand, the more inspirations for creative, win-win solutions will pop into your head.

And there’s a bonus. This type of focus not only helps you resolve issues, it builds good relationships. In a Harvard Business Review article, author Kare Anderson states:

Most motivational speakers, self-help writers, therapists and pharmacologists encourage us to focus on “me.” They suggest that we look inward to understand and improve ourselves for a happier, better life. That’s not wrong; it is just incomplete. Instead of just asking, “What most preoccupies me? Does it make the world seem welcoming or withholding?” reach out to someone else. Be the best listener they’ve had in months. This is the first and most basic ingredient in any interaction. Simply gazing steadily and warmly at that person, nodding at times and reiterating what you heard will activate an empathic, mirror-neuron response in both of you.[1]

So I’ll close with two challenges.

First, for your own safety and that of other drivers, take Oprah’s pledge and make your car a no phone zone. If you must make or take a call, pull over into a parking lot. When you call someone else on their cell phone number, ask first whether they are driving. If so, ask them to phone you back when they are not. Make no exceptions. I’ve found that people are surprisingly receptive to this when I mention to them that it’s because I have taken Oprah’s pledge.

“But I need to know whether I have to pick up my child from school, or whether he’s getting a ride with a friend.” Do you really need to know this minute, as opposed to at your next stop? “But it might be my boss or a client.” Will you really lose your job or your client if you call them back after you pull over?  “But I’m sitting at a red light.” Can you be sure the conversation will end before the light changes?

Here’s another way to look at it. If someone driving while phoning hurt someone you love, would you accept the excuse that he needed to know if his kid wanted a ride, or that he thought it might be his boss calling, or that he started the conversation while sitting at a red light?

If you accept this first challenge, you’ll not only drive more safely, you’ll wire you brain for focused attention in other endeavors.

My second challenge is to practice focus in connection with your important conversations. If, as I hope, you prepare for consensus seeking and other persuasive encounters, turn off the music, the e-mail alerts, and the phone. Then notice the quality and efficiency of your preparation. I’m betting you’ll see a dramatic improvement in speed as well as results.

Then, in the conversation itself, turn off the phone and focus on the other person. Get your mirror neurons in sync. You’ll not only come up with a better result, you’ll build an empathic relationship for the future.

[1] “What Captures Your Attention Controls Your Life, http://blogs.hbr.org/2012/06/what-captures-your-attention-c/

Margaret Anderson’s presentation takes the wisdom of Ben Franklin’s stated virtue: “Speak not but what may benefit others or yourself” into the realm … END_OF_DOCUMENT_TOKEN_TO_BE_REPLACED

While reading “Bridges to Consensus”, I volunteered to organize a project with my quilt bee, 15 professional, talented, and strongly-opinionated w… END_OF_DOCUMENT_TOKEN_TO_BE_REPLACED

Thank you. It was a pleasure attending your class. It taught me to ask “Why?” when I am trying to resolve an issue. I learned a lot and am happy I had… END_OF_DOCUMENT_TOKEN_TO_BE_REPLACED

Although the book [Bridges to Consensus] is written with clergy in mind, I was instantly engrossed in the material and could see my way to using her s… END_OF_DOCUMENT_TOKEN_TO_BE_REPLACED

So much of our daily communication consists of argument, I’m delighted to learn new methods that remove the argument and place both parties on the roa… END_OF_DOCUMENT_TOKEN_TO_BE_REPLACED

My life has gone much more smoothly since taking your class.  Be it a discussion with…or a coworker, there is less stress and more preferable resul… END_OF_DOCUMENT_TOKEN_TO_BE_REPLACED

I believe Bridges to Consensus applies to every facet of our lives… It doesn’t knock you over like a fire hose. It enters your spirit quietly and ge… END_OF_DOCUMENT_TOKEN_TO_BE_REPLACED

It Strikes a Chord: I’ve spent a lifetime reading stories, and I’m not easy to please. This little pocketful kept me pleasurably engaged all the way t… END_OF_DOCUMENT_TOKEN_TO_BE_REPLACED

The course was very interesting and learning the skill set in the classroom to apply in real life situations is invaluable.  It’s definitely about … END_OF_DOCUMENT_TOKEN_TO_BE_REPLACED

As a ghostwriter, I negotiate contracts often, and for “invisible” goods. …Margaret has taught me how to appeal to a prospect’s often hidden needs a… END_OF_DOCUMENT_TOKEN_TO_BE_REPLACED

It [Bridges to Consensus] lends itself specifically to church issues, while making itself significantly useful for understanding communications in any… END_OF_DOCUMENT_TOKEN_TO_BE_REPLACED

Working with Margaret helped me understand that conflict does not automatically have to mean confrontation. Now I know how to seek solutions that bene… END_OF_DOCUMENT_TOKEN_TO_BE_REPLACED

Margaret Anderson was instrumental in helping me hone my skills so that I could sort out, get clear, select, and land a “practically perfect” new busi… END_OF_DOCUMENT_TOKEN_TO_BE_REPLACED

It has been said that one of the best ways to teach is through story. In Love on the Rocks with a Twist, Margaret Anderson teaches the fine art of con… END_OF_DOCUMENT_TOKEN_TO_BE_REPLACED

As a ghostwriter, I negotiate contracts often, and for “invisible” goods. …Margaret has taught me how to appeal to a prospect’s often hidden needs a… END_OF_DOCUMENT_TOKEN_TO_BE_REPLACED

A Go-To Reference & Entertaining Read in One Book: Delightful fiction, indeed! Each of the stories is a standalone pleasure. I especially enjoyed the … END_OF_DOCUMENT_TOKEN_TO_BE_REPLACED