A Persuasion Lesson for Mrs. Hughes 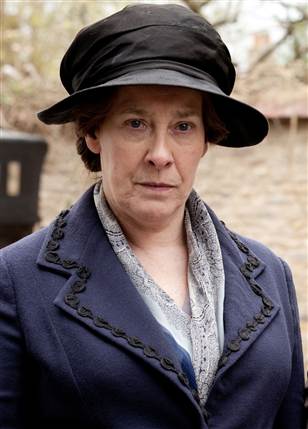 Last week’s episode of Downton Abbey left me wishing that I could have a chat with housekeeper Mrs. Hughes. For anyone who isn’t following the miniseries, here’s a bit of background. A couple of episodes ago, the valet of a visiting nobleman raped Anna, a lady’s maid at Downton and the most beloved character in the entire cast.

As is often the case after rape, Anna found herself unable to tolerate any human touch, and particularly that of her husband Bates, who also serves at Downton.

But Anna refused to tell Bates why she was avoiding him. She had confided only in Mrs. Hughes, swearing her to secrecy. Her reason? She knows her husband well enough to realize that, if he knew of the rape, he would kill the man who committed it. Anna would rather sacrifice her marriage than see Bates condemned to the gallows. As she said to Mrs. Hughes, “Better a broken heart than a broken neck.”

In last week’s episode, Bates strong-armed Mrs. Hughes into telling him the truth, or at least part of it. Rather than identify the rapist, Mrs. Hughes tells Bates the violent attack was committed by a stranger who broke into the house and lay in wait for a victim.

Bates’ approach to Anna is stellar. All tenderness, he assures her that she has nothing to be ashamed of, and on the contrary, that “You are made higher to me and holier because of the suffering you have been put through.”  But he tells her that, if it was Lord Gillingham’s valet who attacked her, “He is a dead man.” He seems to accept Anna’s assurance that it was a stranger, whom she can’t identify.

Later, however, Bates speaks to Mrs. Hughes again. She tells him how happy she is that the couple have reconciled and that everything is over and done with.

Bates replies, “Nothing is over and done with, Mrs. Hughes.”

Surprised, she replies, “But Anna said–”

Bates interrupts her, “Do you think I would add to her burden after all she’s been through?”

“I don’t know his name, so I can’t tell it to you, not if you were to threaten me with a knife, Mr. Bates.”

“I understand, and I won’t press you. But be aware, nothing is over, and nothing is done with.”

Oh, dear! Just as Anna predicted, Bates apparently intends to discover who attacked her and take revenge, and Mrs. Hughes knows it. What can she do to prevent it?

I would advise her to give Bates a little time to recover from the first shock of this terrible news. Then appeal to his interests as he himself sees them. Nothing is more important to Bates than Anna’s happiness and welfare. In fact, Anna’s happiness is his number interest in life.

Mrs. Hughes might ask him some open questions such as, “How would it affect Anna if you were sent to prison, or worse, to the gallows?”

Mrs. Hughes could follow up: “You were wrongfully imprisoned before. What was Anna’s life like then? How happy when she?” She might pause, giving him time to reflect on those questions, then ask: “What if the situation were reversed? What if Anna took some revenge on your behalf at the expense of removing herself from your life? Would you thank her?”

After paving the way with such questions, the time might come for Mrs. Hughes to make a statement: “I know Anna wouldn’t thank you. She has told me, time and again, that her reason for keeping this secret, her reason for not going to the police, was to keep you out of trouble. I know you want her to be happy. Have enough regard for Anna to respect her ideas about what makes her happy, and what makes her happy is having you in her life.”

It’s possible that Bates will not heed Mrs. Hughes, but if I were in her shoes, I would at least pull out my best persuasive skills to save him: open questions to focus him on his own interest in Anna’s happiness, followed, if necessary, by a persuasive appeal, again based on respect for Anna’s ideas about her own happiness.

The course was very interesting and learning the skill set in the classroom to apply in real life situations is invaluable.  It’s definitely about … END_OF_DOCUMENT_TOKEN_TO_BE_REPLACED

It Strikes a Chord: I’ve spent a lifetime reading stories, and I’m not easy to please. This little pocketful kept me pleasurably engaged all the way t… END_OF_DOCUMENT_TOKEN_TO_BE_REPLACED

Thank you. It was a pleasure attending your class. It taught me to ask “Why?” when I am trying to resolve an issue. I learned a lot and am happy I had… END_OF_DOCUMENT_TOKEN_TO_BE_REPLACED

As a ghostwriter, I negotiate contracts often, and for “invisible” goods. …Margaret has taught me how to appeal to a prospect’s often hidden needs a… END_OF_DOCUMENT_TOKEN_TO_BE_REPLACED

My life has gone much more smoothly since taking your class.  Be it a discussion with…or a coworker, there is less stress and more preferable resul… END_OF_DOCUMENT_TOKEN_TO_BE_REPLACED

It [Bridges to Consensus] lends itself specifically to church issues, while making itself significantly useful for understanding communications in any… END_OF_DOCUMENT_TOKEN_TO_BE_REPLACED

I believe Bridges to Consensus applies to every facet of our lives… It doesn’t knock you over like a fire hose. It enters your spirit quietly and ge… END_OF_DOCUMENT_TOKEN_TO_BE_REPLACED

A Go-To Reference & Entertaining Read in One Book: Delightful fiction, indeed! Each of the stories is a standalone pleasure. I especially enjoyed the … END_OF_DOCUMENT_TOKEN_TO_BE_REPLACED

Margaret Anderson was instrumental in helping me hone my skills so that I could sort out, get clear, select, and land a “practically perfect” new busi… END_OF_DOCUMENT_TOKEN_TO_BE_REPLACED

While reading “Bridges to Consensus”, I volunteered to organize a project with my quilt bee, 15 professional, talented, and strongly-opinionated w… END_OF_DOCUMENT_TOKEN_TO_BE_REPLACED

Although the book [Bridges to Consensus] is written with clergy in mind, I was instantly engrossed in the material and could see my way to using her s… END_OF_DOCUMENT_TOKEN_TO_BE_REPLACED

Margaret Anderson’s presentation takes the wisdom of Ben Franklin’s stated virtue: “Speak not but what may benefit others or yourself” into the realm … END_OF_DOCUMENT_TOKEN_TO_BE_REPLACED

It has been said that one of the best ways to teach is through story. In Love on the Rocks with a Twist, Margaret Anderson teaches the fine art of con… END_OF_DOCUMENT_TOKEN_TO_BE_REPLACED

So much of our daily communication consists of argument, I’m delighted to learn new methods that remove the argument and place both parties on the roa… END_OF_DOCUMENT_TOKEN_TO_BE_REPLACED

Working with Margaret helped me understand that conflict does not automatically have to mean confrontation. Now I know how to seek solutions that bene… END_OF_DOCUMENT_TOKEN_TO_BE_REPLACED

As a ghostwriter, I negotiate contracts often, and for “invisible” goods. …Margaret has taught me how to appeal to a prospect’s often hidden needs a… END_OF_DOCUMENT_TOKEN_TO_BE_REPLACED