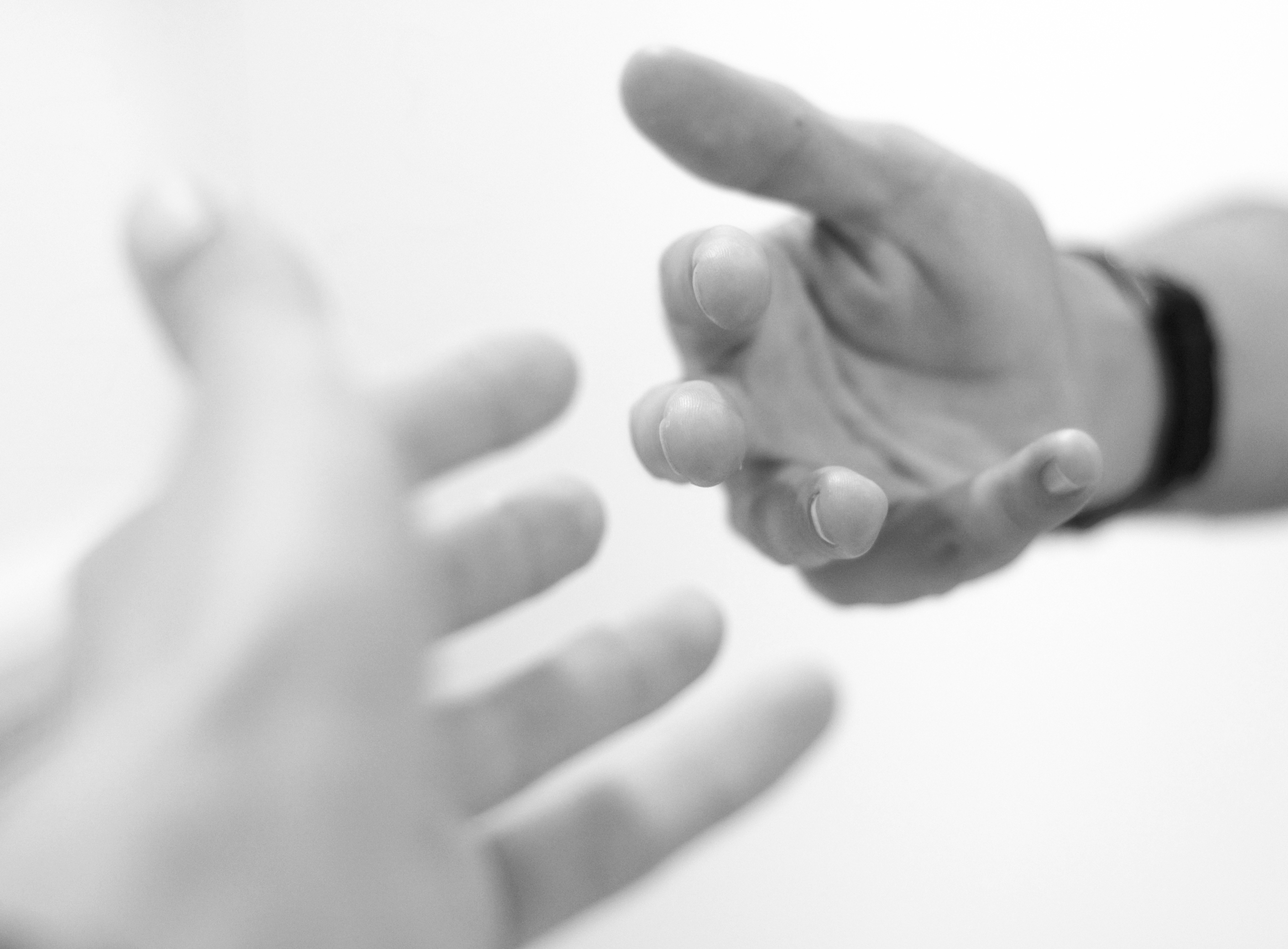 What does empathy have to do with consensus building, persuasion and negotiation? The best way to motivate someone to address your concerns is to understand and address theirs—in ways that are compatible with your own interests. But the most persuasive skills are often counterintuitive. We naturally empathize more with the kinds of concerns we ourselves have experienced.

For example, one of my clients or trainees may wonder why someone can’t “just” come right out and ask for what she wants, rather than hinting at it. He may label her as unfair, manipulative or just plain wrong-headed. But the word “just” doesn’t belong in that sentence. His acquaintance doesn’t ask directly for what she wants because that’s as hard for her as hinting would be for him. She’s had indirectness modeled and taught to her as polite and proper behavior. And just as he considers her wrong in the sense of being unfair, she judges him wrong in the sense of being rude.

Here’s another example of greater empathy for those most similar to ourselves. Studies have shown that people of modest means tend to donate to charities that provide essentials, like food and shelter. Wealthy individuals tend to donate to causes like museums and visual and performing arts.

In fact, in terms of percentage of income, people of modest means donate more to whatever causes they support than do the wealthy. Apparently, having experienced need, or at least occasional uncertainty about whether income would equal the cost of rent and groceries, they feel more empathy with those experiencing such needs at present.

Recently, a Florida mother was on verge of being arrested for shoplifting groceries because she hadn’t been able to feed her children. Her daughter, in tears, later told reporters how hard it had been to see her little brother ask for food and her mom having to tell him there was none.

But rather than jail time, the mother got a gift from a stranger in the store who paid for $100 worth of groceries for her and her family. After the story broke, the mother was offered an opportunity to interview for a job—what she had wanted all along.

But the most relevant point of this story for purposes of this blog—it was the police officer about to arrest the mother who changed her mind and bought the groceries. And even in Miami-Dade, police officers make modest salaries. Why did Officer Vicki Thomas do this? Thomas realized that arresting this mother would not solve the basic need that drove her attempted theft.

Fortunately, studies also show that, when people actually get to know those of different circumstances or backgrounds, the natural human stumbling blocks to understanding fade away.

And I believe most people want to understand others who behave or live differently. In my opinion, that’s one reason why temperamental and cultural diversity in communication styles are among my most popular training topics.

So what does this mean for us as consensus builders, negotiators and persuaders? You never know when you may have occasion to interact with someone who differs from you in some major way that affects their interests—culture, personality, economic status, education or life experience. You can spend a lot of time talking to that person and getting to understand him, and thus, his concerns (assuming he’ll sit still for it). But that can be inefficient, and sometimes, ineffective. People aren’t always aware of their cultural linguistic patterns, for example; they only sense on a deep level that their way of expressing themselves is the polite or “right” way.

While some people are naturally endowed with a high level of empathy. I believe anyone can build the ability to empathize. We can stockpile understanding by reaching out and taking opportunities to get to know as many different kinds of people as possible. TV documentaries provide an interesting and enjoyable way to learn about other cultures.

Better yet, get out into places that allow you to interact with different others. Here in Houston, a nine-to-fiver of modest means might be able to visit the Museum of Fine Arts on a Thursday evening when the museum is open late and admission is free. If he strikes up a conversation with a wealthier looking individual, he may find that she is friendlier than he imagined.

If that wealthy individual were to volunteer at a homeless shelter, she would meet people who would rather not be there and learn about the needs that forced them to take shelter.

Even on a day-to-day basis, we can reach out in little ways to those who are different. Say you’re standing in line at the post office. The person ahead of you is of the same race and approximate age as you, and you can tell English is her first language. The person behind you differs from you in one or more of those factors. Try speaking to him. Stretch beyond your comfort zone. Think of it as an adventure.

After drafting this article yesterday, I went to see the final dress rehearsal of Houston Grand Opera’s production of Die Fledermaus. With reaching out fresh in my mind, I tried speaking to people walking beside me in and out of the theater and to and from restrooms and water fountains—an older couple, two much younger women, a Hispanic couple, and also a woman who looked more like me than any of the others.

The older couple showed a lot more snap than their slow pace might have suggested. The young women engaged me in a friendly manner; they didn’t cut me short as if I were too old to be relevant. The Hispanic couple in the elevator with me, as it turned out, enjoyed the same aspects of the production as I had, even though the English words to express them were a bit more limited.

Only with the white woman in my age bracket, and who dressed as if she were of similar means, was the conversation a bit awkward. But so what? What did I lose by speaking to her? Nothing. What did I gain? An opportunity to reflect later about the interests that might have driven her unusual response to my question, in other words, an opportunity to build on the mindset of empathy.

The more you learn about those who differ from you in various ways, the more likely you are to summon the empathy to understand someone’s interests when you want to build consensus. And that’s how you get them to address your interests, in turn.

I believe Bridges to Consensus applies to every facet of our lives… It doesn’t knock you over like a fire hose. It enters your spirit quietly and ge… END_OF_DOCUMENT_TOKEN_TO_BE_REPLACED

Working with Margaret helped me understand that conflict does not automatically have to mean confrontation. Now I know how to seek solutions that bene… END_OF_DOCUMENT_TOKEN_TO_BE_REPLACED

Margaret Anderson’s presentation takes the wisdom of Ben Franklin’s stated virtue: “Speak not but what may benefit others or yourself” into the realm … END_OF_DOCUMENT_TOKEN_TO_BE_REPLACED

Although the book [Bridges to Consensus] is written with clergy in mind, I was instantly engrossed in the material and could see my way to using her s… END_OF_DOCUMENT_TOKEN_TO_BE_REPLACED

The course was very interesting and learning the skill set in the classroom to apply in real life situations is invaluable.  It’s definitely about … END_OF_DOCUMENT_TOKEN_TO_BE_REPLACED

So much of our daily communication consists of argument, I’m delighted to learn new methods that remove the argument and place both parties on the roa… END_OF_DOCUMENT_TOKEN_TO_BE_REPLACED

A Go-To Reference & Entertaining Read in One Book: Delightful fiction, indeed! Each of the stories is a standalone pleasure. I especially enjoyed the … END_OF_DOCUMENT_TOKEN_TO_BE_REPLACED

Margaret Anderson was instrumental in helping me hone my skills so that I could sort out, get clear, select, and land a “practically perfect” new busi… END_OF_DOCUMENT_TOKEN_TO_BE_REPLACED

While reading “Bridges to Consensus”, I volunteered to organize a project with my quilt bee, 15 professional, talented, and strongly-opinionated w… END_OF_DOCUMENT_TOKEN_TO_BE_REPLACED

It [Bridges to Consensus] lends itself specifically to church issues, while making itself significantly useful for understanding communications in any… END_OF_DOCUMENT_TOKEN_TO_BE_REPLACED

Thank you. It was a pleasure attending your class. It taught me to ask “Why?” when I am trying to resolve an issue. I learned a lot and am happy I had… END_OF_DOCUMENT_TOKEN_TO_BE_REPLACED

As a ghostwriter, I negotiate contracts often, and for “invisible” goods. …Margaret has taught me how to appeal to a prospect’s often hidden needs a… END_OF_DOCUMENT_TOKEN_TO_BE_REPLACED

It has been said that one of the best ways to teach is through story. In Love on the Rocks with a Twist, Margaret Anderson teaches the fine art of con… END_OF_DOCUMENT_TOKEN_TO_BE_REPLACED

My life has gone much more smoothly since taking your class.  Be it a discussion with…or a coworker, there is less stress and more preferable resul… END_OF_DOCUMENT_TOKEN_TO_BE_REPLACED

As a ghostwriter, I negotiate contracts often, and for “invisible” goods. …Margaret has taught me how to appeal to a prospect’s often hidden needs a… END_OF_DOCUMENT_TOKEN_TO_BE_REPLACED

It Strikes a Chord: I’ve spent a lifetime reading stories, and I’m not easy to please. This little pocketful kept me pleasurably engaged all the way t… END_OF_DOCUMENT_TOKEN_TO_BE_REPLACED