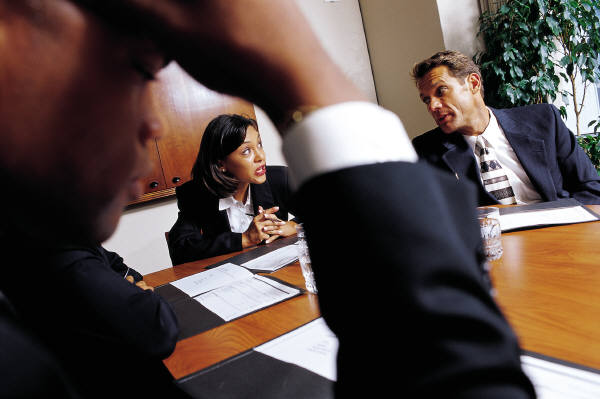 Last week we explored the difference between shyness and introversion as well as the difference between talkativeness and extroversion. But even though “introverted” doesn’t mean shy, shyness or reticence can still impede the quality and quantity of communication. The most reticent members of a group might have some of the best ideas, but the group can’t benefit from those ideas if they don’t hear them.

Likewise, even though “extroverted” doesn’t necessarily mean talkative or outgoing, those who dominate a conversation or meeting, using up more than their fair share of airtime or further inhibiting the shy or reticent, can also create problems.

So how do we deal with the extremely reticent and extremely talkative? Interestingly, the same type of intervention can help with both extremes.

Calling on a shy person by name can make him feel put on the spot, embarrassed, and even more reluctant to open up. Facilitators’ Guide to Participatory Decision-Making by Sam Kaner et al suggests that, instead, the leader address an encouraging comment to the group as a whole, something like, “Let’s hear from someone who hasn’t spoken yet,” or “How about somebody we haven’t heard from in a while?”

Some people rarely speak because they think more reflectively or methodically and need time to gather their thoughts. The “Let’s hear from someone else” intervention helps with this issue as well.  A good facilitator knows that she should tolerate a silent pause of 10 to 15 seconds for this purpose.

However, a 10 or 15 second pause seems like forever to the quick thinkers in the group. They may even feel sorry for the leader or facilitator who has asked a question and is not getting a response. So they rush in to fill what feels to them like an awkward silence. A statement like “Let’s hear from someone who hasn’t spoken” lets the quick thinker know that the leader is okay with the silence. It gives him permission to sit back and let others carry the conversation.

If the leader notices that there is a quick thinker or talker in the group who still tends to break in after a call for comments from those who have not spoken, she can introduce the intervention more overtly, “Let’s be silent for a minute while those who haven’t spoken gather their thoughts.” And if the go-getter still tries to break in, she can simply raise her hand, palm out, about chest level

There are, of course, other reasons why an individual sometimes seems to dominate a discussion. He hammers away at the same point and finds many points to hammer at. He might be thinking out loud or he might keep repeating himself because, when others disagree, he feels they didn’t understand his point, so he tries to explain it again.

When this happens, the instinctive response is to try to squelch the person who is dominating the conversation, or even take him aside during a break and ask him to give others a chance to participate. But if he feels unheard, rebuffed or reprimanded (made wrong) he may become resentful, and therefore less useful to the group, even if he does quiet down.

A better approach is for the leader to briefly paraphrase the point the talkative speaker has made. For example, “So you’re saying that, if we buy the more expensive printer, we’ll make up the cost difference and then some by paying less for supplies, right?” When he hears his point correctly paraphrased, he knows he was understood, which lessens the temptation to re-explain that point.

In my experience, paraphrasing actually saves time overall, while also maintaining the goodwill and enthusiasm of all group members. Once I was scheduled to give a training program for a working group in a large corporation. The person who hired me warned me about one particular group member whom he described as “domineering and hard to deal with.”

I was prepared for a tough time, but in actuality, I found that, when I paraphrased the woman in question, her face would brighten as she said, “Right!” Then she would settle down and listen. I suspect that she had gained such a reputation for dominating a discussion that her colleagues had become used to squelching her before she could make a point even once. Her feeling that she was not heard or understood by her colleagues was probably accurate.

After the class, the person who hired me complimented me on the way I had handled that woman. But in fact, the paraphrasing I did was easy—much easier and more efficient than if I had tried to pull the reins in on the talkative member.

I hope some of you will try these practices in your next meeting, or even in family discussions. Let me know how they work out.

Margaret Anderson’s presentation takes the wisdom of Ben Franklin’s stated virtue: “Speak not but what may benefit others or yourself” into the realm … END_OF_DOCUMENT_TOKEN_TO_BE_REPLACED

While reading “Bridges to Consensus”, I volunteered to organize a project with my quilt bee, 15 professional, talented, and strongly-opinionated w… END_OF_DOCUMENT_TOKEN_TO_BE_REPLACED

Thank you. It was a pleasure attending your class. It taught me to ask “Why?” when I am trying to resolve an issue. I learned a lot and am happy I had… END_OF_DOCUMENT_TOKEN_TO_BE_REPLACED

Although the book [Bridges to Consensus] is written with clergy in mind, I was instantly engrossed in the material and could see my way to using her s… END_OF_DOCUMENT_TOKEN_TO_BE_REPLACED

So much of our daily communication consists of argument, I’m delighted to learn new methods that remove the argument and place both parties on the roa… END_OF_DOCUMENT_TOKEN_TO_BE_REPLACED

My life has gone much more smoothly since taking your class.  Be it a discussion with…or a coworker, there is less stress and more preferable resul… END_OF_DOCUMENT_TOKEN_TO_BE_REPLACED

I believe Bridges to Consensus applies to every facet of our lives… It doesn’t knock you over like a fire hose. It enters your spirit quietly and ge… END_OF_DOCUMENT_TOKEN_TO_BE_REPLACED

It Strikes a Chord: I’ve spent a lifetime reading stories, and I’m not easy to please. This little pocketful kept me pleasurably engaged all the way t… END_OF_DOCUMENT_TOKEN_TO_BE_REPLACED

The course was very interesting and learning the skill set in the classroom to apply in real life situations is invaluable.  It’s definitely about … END_OF_DOCUMENT_TOKEN_TO_BE_REPLACED

As a ghostwriter, I negotiate contracts often, and for “invisible” goods. …Margaret has taught me how to appeal to a prospect’s often hidden needs a… END_OF_DOCUMENT_TOKEN_TO_BE_REPLACED

It [Bridges to Consensus] lends itself specifically to church issues, while making itself significantly useful for understanding communications in any… END_OF_DOCUMENT_TOKEN_TO_BE_REPLACED

Working with Margaret helped me understand that conflict does not automatically have to mean confrontation. Now I know how to seek solutions that bene… END_OF_DOCUMENT_TOKEN_TO_BE_REPLACED

Margaret Anderson was instrumental in helping me hone my skills so that I could sort out, get clear, select, and land a “practically perfect” new busi… END_OF_DOCUMENT_TOKEN_TO_BE_REPLACED

It has been said that one of the best ways to teach is through story. In Love on the Rocks with a Twist, Margaret Anderson teaches the fine art of con… END_OF_DOCUMENT_TOKEN_TO_BE_REPLACED

As a ghostwriter, I negotiate contracts often, and for “invisible” goods. …Margaret has taught me how to appeal to a prospect’s often hidden needs a… END_OF_DOCUMENT_TOKEN_TO_BE_REPLACED

A Go-To Reference & Entertaining Read in One Book: Delightful fiction, indeed! Each of the stories is a standalone pleasure. I especially enjoyed the … END_OF_DOCUMENT_TOKEN_TO_BE_REPLACED