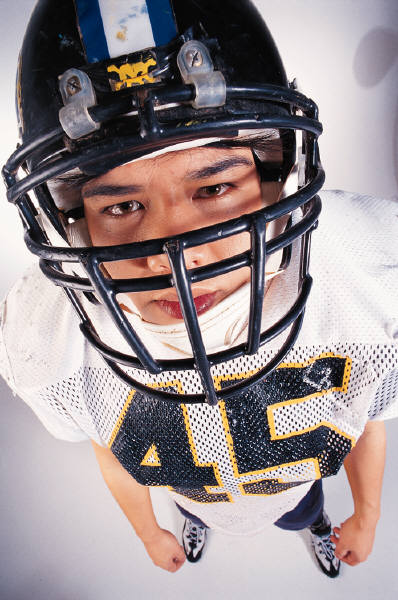 This week I read a heartwarming story of a high school quarterback who instinctively knew, and did, the most effective things to stop others from bullying a special needs girl in his school. The girl, Chy Johnson, functions at about a third grade level. Bullies were calling her names, throwing trash at her, and even shoving her in the corridors between classes.

Bullies often target those who, for one reason or another, can’t stop the bullying on their own. Chy’s mother first tried talking to school faculty and staff members. Even if they had intervened (which they apparently did not), that might have exacerbated the problem. It often does.

So Chy’s mother turned to a football player, CarsonJones, who had once escorted her daughter to the Special Olympics. She hoped that, among other things, Carson might come up with some names of the bullies. But Carson realized that calling out the bullies would likely escalate their attacks. As I’ve written before, people resist being made wrong, even when they really are wrong, like these bullies.

Carson did what experts have learned actually works. He “adopted” Chy and inspired the rest of the football team to do likewise. They invited Chy to sit with them at the “cool kids’” table in the cafeteria. They got organized and scheduled football players to walk with Chy in the corridors between classes.

As pointed out in chapter 13 of Bridges to Consensus, when third parties remain silent and inactive in the face of bullying, both the bully and his victim feel that silence means consent. While faculty intervention can actually backfire, support for the victim by a critical mass of those who disapprove of the bullying works better, and it did so in Chy’s case. The bullying of this child stopped.

Adults, too, can be bullied. They have their own special set of problems. Bystanders, and even the victim himself, are less likely to recognize bullying for what it is when it is not physical and targets adults whom people assume capable of defending themselves. Unfortunately, this happens in nonprofit and volunteer organizations, to the detriment of all.

Bridges gives the example of a minister placed in a no-win situation by a clever and subtle grown-up bully.  The bully does not express his real reasons for turning against the minister. Nor does he complain to the minister herself. Instead, he levels birdshot attacks—a host of minor complaints—to other members of the congregation in unofficial “parking lot” conversations. This creates a dilemma for the minister:

If the critic senses defensiveness, which can read as weakness to him, he feels emboldened to escalate the criticism. On the other hand, if he feels counterattacked, he not only escalates, but garners allies as well. Neither defensiveness nor counterattack work well, especially for a minister.

If she simply ignores the complaints, other congregants, who hear only the critic’s side of things, may agree with him. Moreover, the victim’s silence can be misconstrued. The minister may be seen as cavalier or uncaring. She must, people think, be determined to stubbornly keep on doing what she’s doing without taking others’ concerns into account.

Of course, the victim can try to speak to the critic, using consensus skills, but many factors can work against the success of such an effort. She might not become aware of the criticism until much damage has been done among the other members of the congregation. The critic may not open up to her about what’s really driving the criticism, either because he doesn’t own it even to himself, because he doesn’t want reconciliation but rather to punish the minister, or for other reasons. He might discuss a host of other little peeves, leaving the stealth interest under cover. Or he may refuse to speak to the minister at all.[1]

This is why a critical mass of others in the group should learn respectful, minimally wrong-making, but effective, ways of communicating to the bully that they will not fall for his attempts to unfairly or unreasonably whittle away at his victim.[2]

Meanwhile, we can all teach the children we know that they can become leaders by encouraging their friends to simply show acceptance and kindness to the kids who get picked on. If the bullying threatens to get physical, all it may take is a number of third parties silently placing themselves between the bully and his victim. This action is empowering for both the victim and the interveners. And it deters, rather than escalating, further bullying by the perpetrator.

As a ghostwriter, I negotiate contracts often, and for “invisible” goods. …Margaret has taught me how to appeal to a prospect’s often hidden needs a… END_OF_DOCUMENT_TOKEN_TO_BE_REPLACED

Working with Margaret helped me understand that conflict does not automatically have to mean confrontation. Now I know how to seek solutions that bene… END_OF_DOCUMENT_TOKEN_TO_BE_REPLACED

My life has gone much more smoothly since taking your class.  Be it a discussion with…or a coworker, there is less stress and more preferable resul… END_OF_DOCUMENT_TOKEN_TO_BE_REPLACED

So much of our daily communication consists of argument, I’m delighted to learn new methods that remove the argument and place both parties on the roa… END_OF_DOCUMENT_TOKEN_TO_BE_REPLACED

It Strikes a Chord: I’ve spent a lifetime reading stories, and I’m not easy to please. This little pocketful kept me pleasurably engaged all the way t… END_OF_DOCUMENT_TOKEN_TO_BE_REPLACED

Although the book [Bridges to Consensus] is written with clergy in mind, I was instantly engrossed in the material and could see my way to using her s… END_OF_DOCUMENT_TOKEN_TO_BE_REPLACED

Margaret Anderson was instrumental in helping me hone my skills so that I could sort out, get clear, select, and land a “practically perfect” new busi… END_OF_DOCUMENT_TOKEN_TO_BE_REPLACED

It has been said that one of the best ways to teach is through story. In Love on the Rocks with a Twist, Margaret Anderson teaches the fine art of con… END_OF_DOCUMENT_TOKEN_TO_BE_REPLACED

Margaret Anderson’s presentation takes the wisdom of Ben Franklin’s stated virtue: “Speak not but what may benefit others or yourself” into the realm … END_OF_DOCUMENT_TOKEN_TO_BE_REPLACED

It [Bridges to Consensus] lends itself specifically to church issues, while making itself significantly useful for understanding communications in any… END_OF_DOCUMENT_TOKEN_TO_BE_REPLACED

While reading “Bridges to Consensus”, I volunteered to organize a project with my quilt bee, 15 professional, talented, and strongly-opinionated w… END_OF_DOCUMENT_TOKEN_TO_BE_REPLACED

Thank you. It was a pleasure attending your class. It taught me to ask “Why?” when I am trying to resolve an issue. I learned a lot and am happy I had… END_OF_DOCUMENT_TOKEN_TO_BE_REPLACED

I believe Bridges to Consensus applies to every facet of our lives… It doesn’t knock you over like a fire hose. It enters your spirit quietly and ge… END_OF_DOCUMENT_TOKEN_TO_BE_REPLACED

As a ghostwriter, I negotiate contracts often, and for “invisible” goods. …Margaret has taught me how to appeal to a prospect’s often hidden needs a… END_OF_DOCUMENT_TOKEN_TO_BE_REPLACED

The course was very interesting and learning the skill set in the classroom to apply in real life situations is invaluable.  It’s definitely about … END_OF_DOCUMENT_TOKEN_TO_BE_REPLACED

A Go-To Reference & Entertaining Read in One Book: Delightful fiction, indeed! Each of the stories is a standalone pleasure. I especially enjoyed the … END_OF_DOCUMENT_TOKEN_TO_BE_REPLACED