Consensus Success in a Volunteer Group 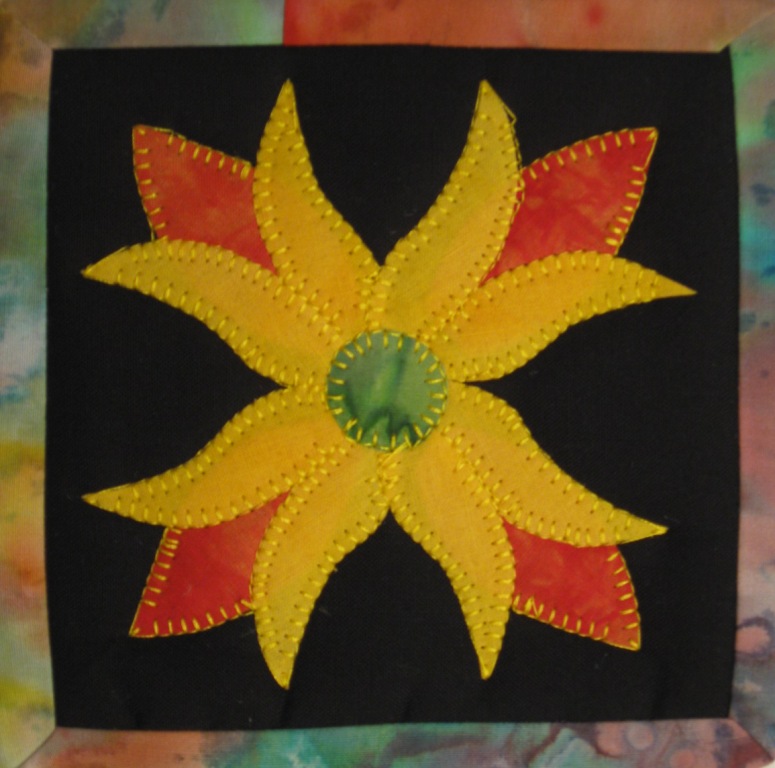 I love hearing my clients’ and readers’ success stories, especially when they involve new contexts for application of their consensus, persuasion and communication skills. This week, Gracie of Austin, Texas wrote to me, “While reading Bridges to Consensus, I volunteered to organize a project with my quilt bee, fifteen professional, talented, and strongly-opinionated women.”

Gracie’s volunteer group of fifteen undertook the design and crafting of 135 miniature quilts to attach to the tops of the award ribbons for a quilting contest associated with the Quiltfest biennial show. [With Gracie’s permission, I’ve included an image of one of the awards with this article.]

Volunteer and affinity groups have even greater consensus needs than commercial organizations. In this respect, they are more like religious and nonprofit organizations. In the business world, the old command-and-control paradigm can function for at least a while, although collaborative processes often work better. A boss can tell a worker what to do, and the worker is less likely to rebel if he’s getting paid to do what the boss wants. The worker may look for another employer who values his contributions and meets his need better, but he takes time to do so, and usually gives notice if he quits.

However, in groups like Gracie’s, as in churches and nonprofits, members can more easily vote with their feet if their needs are ignored, and they can do so on the spur of the moment. So building consensus among volunteers can be even more important than in commercial settings.

A natural leader and talented artist, Gracie excels at envisioning a good plan for a project such as the contest awards. It’s tempting for such leaders to simply present their visions and push for acceptance. However, Gracie writes that, inspired by Bridges to Consensus:

Rather than force the group to meet my goals, I used the “Three Magic Questions” and was thrilled with the results. I found that my group was open minded and motivated to work together. Instead of making an executive decision when we encountered issues, I rallied for dialogue on a solution.

It was a challenge for me to simply document the process the bee developed, but it turned out to be one of my best contributions to the team. During a key month of production, I was out of town helping my mother recover from hip replacement surgery. My quilt bee used the production documents I wrote to continue in my absence.

The project is complete six months ahead of schedule and my quilt bee members are thrilled with the results. I am very proud of the 2012 QuiltFest Awards and of the friendships that we strengthened during their creation.

Like Gracie, many people find that, when it comes to team leadership, less can be more. She found it challenging to ask questions and listen more than she spoke, but once she tried it, Gracie learned that soliciting everyone’s ideas resulted in a better plan from her own perspective as well. And asking the right questions inspired fifteen “highly opinionated” people to want to work collaboratively.

As explained in Bridges to Consensus, when you offer most of the solution ideas, you often wind up contributing more effort than other group members. When we focus on the interests we wish to satisfy, rather than rush in with a full-blown plan, we may find that others have ways to address our interests even better than we ourselves imagined.

Did Gracie “demote” herself from a team leader to a mere scribe by taking notes? Not at all. She was still the leader, and her production documentation led the group in her absence. In her own words, “Your book made me a hero on this project. I can’t thank you enough.”

But the part of Gracie’s story I like best is her comment about how the process she used strengthened friendships among the group members—proof positive that our consensus skills really do build bridges.

I believe Bridges to Consensus applies to every facet of our lives… It doesn’t knock you over like a fire hose. It enters your spirit quietly and ge… END_OF_DOCUMENT_TOKEN_TO_BE_REPLACED

Working with Margaret helped me understand that conflict does not automatically have to mean confrontation. Now I know how to seek solutions that bene… END_OF_DOCUMENT_TOKEN_TO_BE_REPLACED

Margaret Anderson’s presentation takes the wisdom of Ben Franklin’s stated virtue: “Speak not but what may benefit others or yourself” into the realm … END_OF_DOCUMENT_TOKEN_TO_BE_REPLACED

Although the book [Bridges to Consensus] is written with clergy in mind, I was instantly engrossed in the material and could see my way to using her s… END_OF_DOCUMENT_TOKEN_TO_BE_REPLACED

The course was very interesting and learning the skill set in the classroom to apply in real life situations is invaluable.  It’s definitely about … END_OF_DOCUMENT_TOKEN_TO_BE_REPLACED

So much of our daily communication consists of argument, I’m delighted to learn new methods that remove the argument and place both parties on the roa… END_OF_DOCUMENT_TOKEN_TO_BE_REPLACED

A Go-To Reference & Entertaining Read in One Book: Delightful fiction, indeed! Each of the stories is a standalone pleasure. I especially enjoyed the … END_OF_DOCUMENT_TOKEN_TO_BE_REPLACED

Margaret Anderson was instrumental in helping me hone my skills so that I could sort out, get clear, select, and land a “practically perfect” new busi… END_OF_DOCUMENT_TOKEN_TO_BE_REPLACED

While reading “Bridges to Consensus”, I volunteered to organize a project with my quilt bee, 15 professional, talented, and strongly-opinionated w… END_OF_DOCUMENT_TOKEN_TO_BE_REPLACED

It [Bridges to Consensus] lends itself specifically to church issues, while making itself significantly useful for understanding communications in any… END_OF_DOCUMENT_TOKEN_TO_BE_REPLACED

Thank you. It was a pleasure attending your class. It taught me to ask “Why?” when I am trying to resolve an issue. I learned a lot and am happy I had… END_OF_DOCUMENT_TOKEN_TO_BE_REPLACED

As a ghostwriter, I negotiate contracts often, and for “invisible” goods. …Margaret has taught me how to appeal to a prospect’s often hidden needs a… END_OF_DOCUMENT_TOKEN_TO_BE_REPLACED

It has been said that one of the best ways to teach is through story. In Love on the Rocks with a Twist, Margaret Anderson teaches the fine art of con… END_OF_DOCUMENT_TOKEN_TO_BE_REPLACED

My life has gone much more smoothly since taking your class.  Be it a discussion with…or a coworker, there is less stress and more preferable resul… END_OF_DOCUMENT_TOKEN_TO_BE_REPLACED

As a ghostwriter, I negotiate contracts often, and for “invisible” goods. …Margaret has taught me how to appeal to a prospect’s often hidden needs a… END_OF_DOCUMENT_TOKEN_TO_BE_REPLACED

It Strikes a Chord: I’ve spent a lifetime reading stories, and I’m not easy to please. This little pocketful kept me pleasurably engaged all the way t… END_OF_DOCUMENT_TOKEN_TO_BE_REPLACED