Defense Against the Dark Parts of Persuasion: AUTHORITY 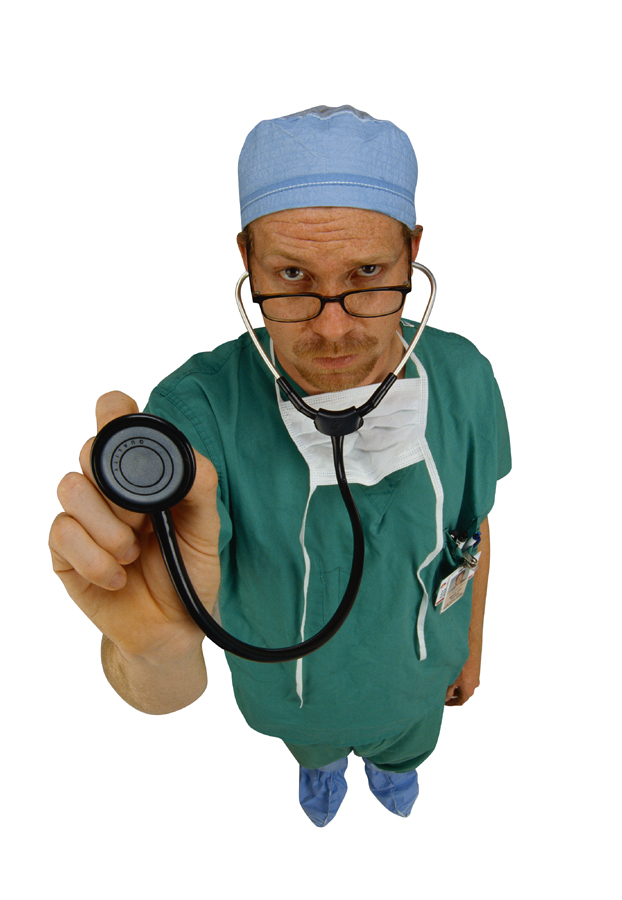 Years ago, many of us read about experiments in which research volunteers complied with with the instructions of a lab-coded, clipboard-toting researcher to deliver increasing electrical shocks to a “test subject” whenever that subject answered a question incorrectly. In reality, the volunteers who flipped the switches to deliver the shocks were the true test subjects. Unknown to them, the electrical shocks were not real, and the people they thought they were shocking were actors in league with the researcher,

What I didn’t know back then, but later learned from Dr. Cialdini’s book, Influence: the Psychology of Persuasion[1], amazed me. First, an astounding 65% of the volunteers continued to obey the researcher until the highest voltage shock lever had been flipped, even though the actor screamed, pleaded, and eventually feigned a near-catatonic state in which he was no longer able to answer any questions at all. Moreover, they did this even when the actor had first announced that he had heart trouble, and began to complain about his heart during the experiment.

If you think these volunteers must have been atypical and/or sadistic, think again. Careful initial controls and follow-up studies proved that the volunteers represented a typical cross-section of society, with no psychological abnormalities. They hated what they were doing, and begged the researcher to let them stop. Cialdini describes one volunteer who entered the room as a poised businessman and ended up on the point of nervous collapse.

Like all the triggers exploited by compliance professionals, deference to authority is wired into our brains. In other words, we tend to obey without thinking, and that’s just what compliance professionals want. They want us to comply with their requests and suggestions without thinking. They use symbols of authority in advertisements, face-to-face pitches, and all sorts of ideological communications.

Authority symbols can be clothing, like a lab coat, a police uniform, or even a nice business suit. In one experiment, people were more likely to follow a jaywalker across the street when he was dressed in a business suit, rather than casual clothes. Other types of status symbols can trigger similar responses. When a luxury car is first in line at a red light, and doesn’t move when the light turns green, people behind it wait longer before honking than they do if the first car is an economy vehicle. Other triggers may be things we hear, rather than see, such as the titles Dr., Professor, or Officer.

Obviously, always refusing to obey or follow authority figures is not an option. That brain wiring evolved for good reasons. When a captain calls, “Abandon ship,” or a police officer shouts, “Show your hands,” it’s in your interest to do so ASAP. Imagine what would happen to a football team if, instead of following the quarterback’s calls, each member made his own decision about which play to run.

An advertisement on television is neither an emergency nor a precision team effort. We can, and should, learn to override our brain wiring before deciding whether to believe or buy from certain apparent authority figures. On the other hand, we don’t have time to personally research every decision we make, and in some cases, we don’t have the background to understand the research. There are times when we must rely on authority figures. So how do we tell the difference?

Cialdini suggests that, when we observe an authority symbol in an advertisement or the like, we should ask ourselves two questions. First, is the person really an expert? Second, is the person’s expertise actually relevant to the subject matter? When you answer either question “No,” beware. If we get into the habit of asking these questions, in other words, taking time to think (where it’s practical to do so), we can avoid autopilot mistakes such as buying a product because the actor in the advertisement is wearing a stethoscope or following a well-dressed person across the street against a red light.

But even answering these questions gets tricky. Cialdini notes a compliance technique of making a statement contrary to the apparent authority figure’s interests in order to make her seem legitimate and objective. The concession statement is always less compelling than the real message. A TV ad for Listerine mouthwash might show someone wincing while swishing, but the commentator assures the viewer that the sting is worth it.

To all of Dr. Cialdini’s wisdom, I would add that professionals can use even more subtle authority triggers. At least we recognize a doctor’s white coat as an authority symbol, which can cue us to ask Cialdini’s two questions. But more subtle, possibly subliminal, triggers are things we don’t recognize.

I once took a continuing studies course at Rice University entitled “Conflict, Violence, War and Hope.” One lecturer pointed out that we have unconsciously become accustomed to see the highest authority figures in news broadcasting, such as anchors, facing the camera directly. This also gives us the impression that they are speaking directly to us, the viewers. Persons being interviewed may be shot at an angle. An interviewer or panel moderator at the head of a table may face the camera directly, while the panelists or interviewees, seated along the sides, appear at an angle to the viewer.

The unconscious influence of camera angle is only one factor that I happened to learn about. There must be many others that I don’t know about, and that are not recognizable to me as traditional authority symbols. Perhaps we can’t learn all of these, but we can protect ourselves against at least some of them.

I suggest that, when considering an important decision, such as a major purchase, we take time to do what compliance professionals don’t want us to do—think. Take a break and reconsider the matter in a day or so when you are not exposed to the original message.

Many of these triggers are visual. Auditory signals, such as timbre and tone of voice, can also influence us without our awareness. So if, for example, you find yourself swayed buy something you see on television, it may help to read more about the matter in print only, whether online or in hard copy.

Finally, be on the lookout for information about other means of influence. Every issue of Psychology Today is full of examples of studies showing humans behaving in surprisingly illogical ways, and pointing out the things that trigger such behavior. For me, it’s no effort to find time to read such fascinating articles and equally fascinating books like Influence[2]. I’ll be writing about more of them in future posts in this “Dark Arts” series.

As a ghostwriter, I negotiate contracts often, and for “invisible” goods. …Margaret has taught me how to appeal to a prospect’s often hidden needs a… END_OF_DOCUMENT_TOKEN_TO_BE_REPLACED

Working with Margaret helped me understand that conflict does not automatically have to mean confrontation. Now I know how to seek solutions that bene… END_OF_DOCUMENT_TOKEN_TO_BE_REPLACED

My life has gone much more smoothly since taking your class.  Be it a discussion with…or a coworker, there is less stress and more preferable resul… END_OF_DOCUMENT_TOKEN_TO_BE_REPLACED

So much of our daily communication consists of argument, I’m delighted to learn new methods that remove the argument and place both parties on the roa… END_OF_DOCUMENT_TOKEN_TO_BE_REPLACED

It Strikes a Chord: I’ve spent a lifetime reading stories, and I’m not easy to please. This little pocketful kept me pleasurably engaged all the way t… END_OF_DOCUMENT_TOKEN_TO_BE_REPLACED

Although the book [Bridges to Consensus] is written with clergy in mind, I was instantly engrossed in the material and could see my way to using her s… END_OF_DOCUMENT_TOKEN_TO_BE_REPLACED

Margaret Anderson was instrumental in helping me hone my skills so that I could sort out, get clear, select, and land a “practically perfect” new busi… END_OF_DOCUMENT_TOKEN_TO_BE_REPLACED

It has been said that one of the best ways to teach is through story. In Love on the Rocks with a Twist, Margaret Anderson teaches the fine art of con… END_OF_DOCUMENT_TOKEN_TO_BE_REPLACED

Margaret Anderson’s presentation takes the wisdom of Ben Franklin’s stated virtue: “Speak not but what may benefit others or yourself” into the realm … END_OF_DOCUMENT_TOKEN_TO_BE_REPLACED

It [Bridges to Consensus] lends itself specifically to church issues, while making itself significantly useful for understanding communications in any… END_OF_DOCUMENT_TOKEN_TO_BE_REPLACED

While reading “Bridges to Consensus”, I volunteered to organize a project with my quilt bee, 15 professional, talented, and strongly-opinionated w… END_OF_DOCUMENT_TOKEN_TO_BE_REPLACED

Thank you. It was a pleasure attending your class. It taught me to ask “Why?” when I am trying to resolve an issue. I learned a lot and am happy I had… END_OF_DOCUMENT_TOKEN_TO_BE_REPLACED

I believe Bridges to Consensus applies to every facet of our lives… It doesn’t knock you over like a fire hose. It enters your spirit quietly and ge… END_OF_DOCUMENT_TOKEN_TO_BE_REPLACED

As a ghostwriter, I negotiate contracts often, and for “invisible” goods. …Margaret has taught me how to appeal to a prospect’s often hidden needs a… END_OF_DOCUMENT_TOKEN_TO_BE_REPLACED

The course was very interesting and learning the skill set in the classroom to apply in real life situations is invaluable.  It’s definitely about … END_OF_DOCUMENT_TOKEN_TO_BE_REPLACED

A Go-To Reference & Entertaining Read in One Book: Delightful fiction, indeed! Each of the stories is a standalone pleasure. I especially enjoyed the … END_OF_DOCUMENT_TOKEN_TO_BE_REPLACED